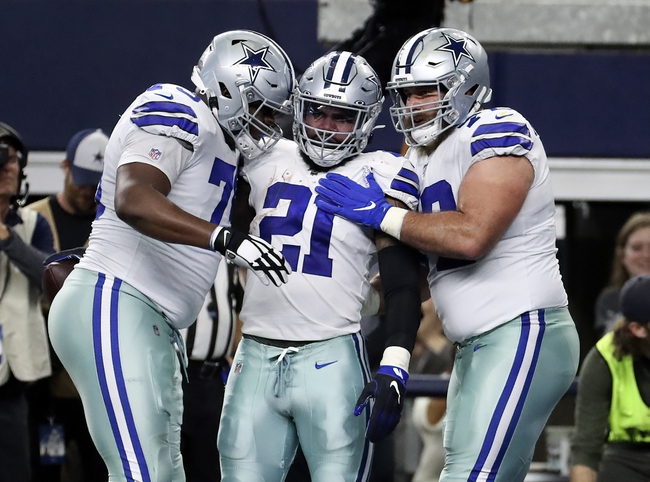 The Dallas Cowboys and the Pittsburgh Steelers meet in a Madden 20 simulation matchup on Wednesday afternoon.

The Dallas Cowboys come in fresh off of a 40-37 overtime loss to the New England Patriots last time out. Ezekiel Elliott leads the Cowboys offensive unit with a 93 overall grade with 90 speed, 91 acceleration and 95 agility while Amari Cooper leads Dallas’ receiving group with a 91 overall rating including, 92 speed, 96 agility and 89 catching. Dak Prescott has an 81 overall rating with 87 throwing power and 88 short pass accuracy. The Cowboys also have some strong beef in the way of O-linemen, with Zack Martin owning a team-high 97 overall rating while Tyron Smith is at left tackle at 91 overall. Defensively, Byron Jones and Demarcus Lawrence lead the Cowboys’ defense at 88 overall apiece, with Lawrence having a 93 finesse move rating, 89 power move and 88 block shedding rating while Jones has 92 speed, 94 acceleration and 96 agility to go along with an 84 man coverage rating and 90 zone coverage rating in the Dallas secondary.

The Pittsburgh Steelers enter this one at 3-2 fresh off of the heels of a 49-14 thrashing of the Browns last time out. JuJu Smith-Schuster leads the Steelers’ receiving group  with an 86 overall rating, including 91 speed and 92 acceleration to go along with 90 catching and 93 catching in traffic. James Conner comes with an 81 overall rating at running back with 86 speed, 89 acceleration and 89 carrying while Ben Roethlisberger is back at QB with an 81 overall mark with 89 throwing power and 89 short pass accuracy. Defensively, Cameron Heyward is the top dog for the Steeler defense at 90 overall with 93 strength, 91 tackling and 92 power move while Stephon Tuitt is on the other side of the front at 87 overall with 90 block shedding and 91 strength.

This is arguably the best game on Wednesday’s card, and it boasts two of the higher scoring teams in the sim game as Dallas is still averaging almost 40 PPG since the sims have started, while Pittsburgh has been putting up at least 34 points most times that they take the field. It may seem a bit too obvious given those numbers, but I’ll side with the over here. The totals aren’t necessarily adjusting with the simulation results and not only do a lot of these games tend to go over, but these two teams in particular can score with the best of them. I wouldn’t be surprised if we hit 70 points when all was said and done, so I’ll take the over here.

The pick in this article is the opinion of the writer, not a Sports Chat Place site consensus.
Previous Pick
Kenneth Murray 2020 NFL Draft Profile, Strengths, Weaknesses and Possible Fits
Next Pick
NFC vs. AFC - 4/8/20 Madden20 Sim NFL Pick, Odds, and Prediction