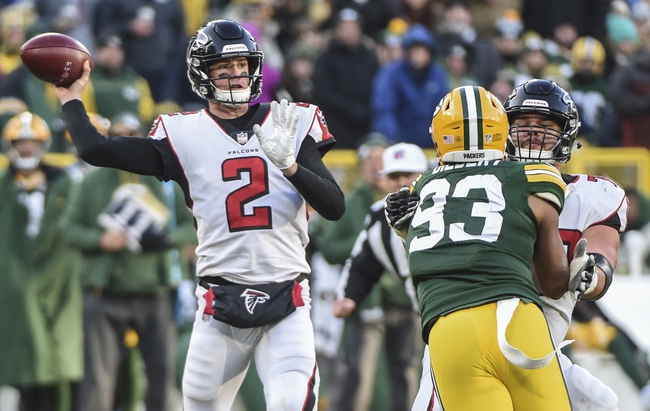 The Green Bay Packers and the Atlanta Falcons meet in a Madden 20 NFL simulation game on Thursday night.

The Green Bay Packers come into this game with a 3-3 record after back-to-back losses with a 37-27 loss to the Seattle Seahawks last time out. Davante Adams leads the Packers’ receiving group and offensive skill players with a 94 overall rating, including matching 94 catching and catching in traffic ratings while owning 89 speed and 92 acceleration. Aaron Rodgers comes in at QB with an 89 overall rating, with 94 throwing power, 90 short pass accuracy and high-80s ratings in medium and deep pass accuracy. Aaron Jones leads the Packer backfield with an 87 overall mark with 93 carrying, 92 juke, 91 speed and 93 acceleration. Defensively, Kenny Clark leads the Green Bay defense and pass rush at 90 overall with 95 strength with 92 block shedding and 89 power moves while Jaire Alexander is right behind at 89 overall to lead the Packers’ secondary at corner, with 92 man coverage in addition to 93 ratings in speed and acceleration with 94 agility. Za’Darius Smith and Adrian Amos come in at 88 and 87 overall respectively, to round out a strong nucleus of the Green Bay defense.

The Atlanta Falcons come into this game with a 2-2 sim record fresh off of a 27-17 loss to Carolina last time out. Julio Jones leads Atlanta with a 97 overall rating, including 92 speed and 94 agility to go along with 96 catching, 95 catching in traffic and 98 spectacular catch. Austin Hooper is a strong 89 overall at tight end with 97 catching while Matt Ryan comes in at 87 overall at QB and Devonta Freeman rounds out the offensive attack in the backfield with an 85 overall grade with 92 speed and 94 agility. Defensively, Grady Jarrett leads the Falcons’ defense at 90 overall with 89 strength, 90 block shedding and 93 power moves while Deion Jones leads the linebackers at 86 overall with 89 pursuit, 90 speed and 91 acceleration. Keanu Neal and Desmond Trufant anchor the secondary at 85 and 84 overall respectively with Trufant logging 92 speed, 93 acceleration and 96 agility.

I totally get why the total is set where it is, but this is the highest total I remember seeing since they started doing these simulated games just a couple of weeks ago. The Packers have been giving up a lot of points lately, but overall, the defense is pretty good and if Green Bay shuts down Jones and Hooper, Atlanta’s going to have issues moving the ball. On the flipside, Atlanta has some decent defensive pieces of their own and the Falcons have been playing some fairly solid defensive football as well lately. I could see this being a game in the ballpark of 31-28 or 32-29, but either way, not matter how you slice it, I think this total’s too high so I’ll take the under.