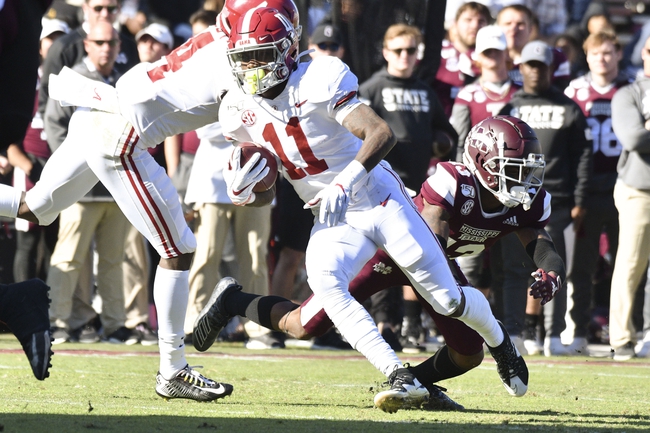 Henry Ruggs III comes into the 2020 NFL Draft projected by many to be yet another first-round pick out of the Nick Saban system at Alabama. Ruggs was still a major part of Alabama notching their 12th straight double-digit win season which culminated in a win in the Citrus Bowl over Michigan.

College Career: Ruggs III’s story is interesting as he’s a projected 1st-round NFL pick that didn’t really start playing football until high school. Ruggs III committed to Alabama as a four-star recruit out of Robert E. Lee High in Montgomery, AL, signing with the Tide in honor of his best friend, Rod Scott, who had passed away in a tragic car accident in 2016. Ruggs got off to a slow start in his freshman year, but thrived over the next two seasons, logging at least 40+ catches and 700+ yards in each. Ruggs III would have 46 grabs for 741 yards and 11 touchdowns in 2018 and a personal best 746 receiving yards in 2019.

Strengths: Ruggs III is as fast as a bullet. That’s his bread and butter and even when teams prepared for it, they weren’t ready. Ruggs III has an elite level of speed, acceleration and agility that makes him a big play threat every play that he’s on the field. He impacts your game plans as an opposing team because his speed and play-making ability forces you to keep an extra defender deep in case he breaks free. Ruggs III also is solid running his routes as he breaks and cuts with relative ease, and he would step up when the Tide needed him to with arguably his best game of the year coming in the Iron Bowl loss to Auburn where he had 6 catches for 99 yards.

Weaknesses: Ruggs III is only 6’1”, so the main concern from an in-game standpoint is that he’s not the tallest receiver, and while e may be taller than some corners that he’ll go up against, Ruggs III’s strength is winning a foot race downfield as opposed to winning a 50/50 jump ball in the air. There’s also concern about concussion history with Ruggs that will have some NFL teams worried, especially with Ruggs’ smaller stature at 6’1” coming into the draft.

Outlook/Possible Fit: Ruggs III won’t be a quantity over quality receiver like these wideouts like Michael Thomas or DeAndre Hopkins who perennially have 100+ reception seasons, but Ruggs III will still have an impact with whichever team he plays for. His constant threat as a home run hitter will result in a high yards per catch average and even when the ball isn’t coming his way, the speed threat will always keep defenses on their toes that there’s always a chance the ball is coming his way. There are concerns about possible concussions in the past, but Ruggs III has as good of a chance as any top-tier receiver in this draft to be a game-changing player if he can stay healthy. As far as a specific team goes, I think the best fit for Ruggs would be the Denver Broncos. Denver cut ties with Demaryius Thomas and Emmanuel Sanders in back-to-back seasons, and while Courtland Sutton is coming off of his first 1,000-yard season and is probably going to be the Broncos’ top receiver for years to come, he can’t do it on his own. A secondary receiver like Ruggs III blazing downfield would open up space for guys like Sutton and tight end Noah Fant and it gives blossoming quarterback Drew Lock an downfield threat better than anything he had when he was lighting things up offensively at Missouri.