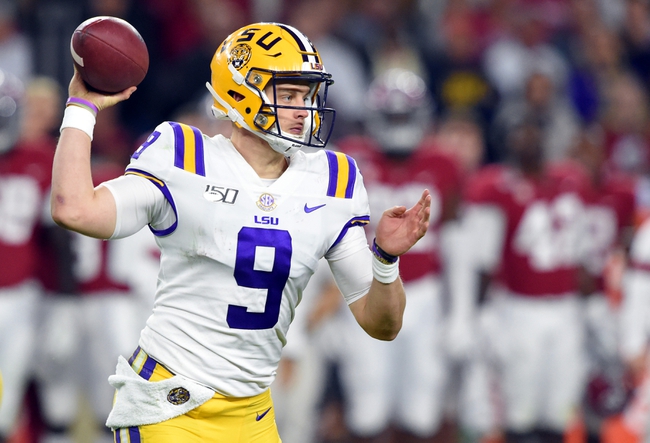 Joe Burrow enters the draft as the projected number one overall pick, fresh off of leading the LSU Tigers back to the top of the college football mountain, guiding LSU to their first national championship since 2007.

College career: Burrow spent the first two years of his college career backing up J.T. Barrett at Ohio State, but once Burrow realized that Dwayne Haskins would take over for the Buckeyes under center in the 2018 season, he transferred to LSU. In 2018, Burrow threw for 2,894 yards, 16 touchdowns and 5 picks while rushing for almost 400 yards and 7 TDs, culminating in a win in the Fiesta Bowl. In 2019 though, Burrow almost doubled his yardage output, throwing for just under 5,700 yards and a whopping 60 touchdowns compared to just 6 interceptions. Burrow would also complete 76.3% of his pass attempts on the way to winning the Heisman trophy and being named first-team all SEC for that year.

Strengths: Ask any coach, what the most important skill is for a passing quarterback when going pro, and the majority of them, if not all of them, will tell you that accuracy is paramount. Burrow’s accuracy is one of his biggest strengths going forward as he can squeeze the ball into tight spaces and leading his receivers into the open spaces to guide them to more yardage downfield. Burrow’s completion percentage this season at 76.3% was downright nasty, but the guy could run to and escape the pocket if need be. Burrow has the passion to be a leader and is definitely a student of the game after learning a completely new system at LSU and guiding the Tigers to the promise land in 2019.

Weaknesses:  Knocks are hard to find on Burrow, especially after such a strong year to cap off his time at LSU. However, one has to wonder if Burrow’s season was just a one-off, and if a multitude of things propelled him to the spot that he’s in right now (eg. Chase Young’s suspension mid-season or Tua Tagovailoa getting injured against Mississippi State last year). Burrow also has some of the smaller hands for a starting QB, measuring just around 9 inches, and that could be a part of why many scouts believe Burrow has limitations for his arm strength in terms of launching the ball downfield. Burrow makes up for it by getting air underneath the ball to launch it downfield, but a lack of power an give defenders an extra second’s jump to get there and break up or maybe even worse, intercept the pass.

Outlook/Possible Fits: I think any way you slice it, Burrow is the top pick in this draft. What we saw in that championship season at LSU was one of the best single seasons in college football history and the Cincinnati Bengals have to be licking their chops at #1 overall to get their hands on this guy. Andy Dalton was a serviceable option under center for the Bengals, and Burrow has received plenty of Andy Dalton comparisons, but with that said, the Bengals would be foolish to not take Burrow #1 overall here given their need for a fresh face at quarterback.