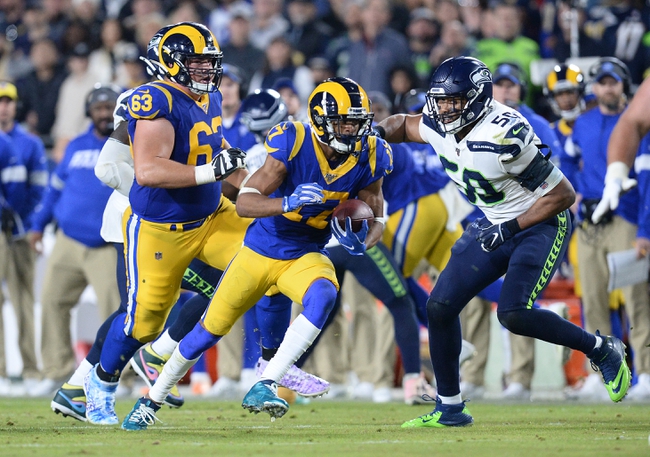 The Seattle Seahawks and the Los Angeles Rams meet in an NFC West division tilt in a Madden 20 NFL simulated game on Thursday night.

The Seattle Seahawks will try to remain unbeaten in simulation play, improving their simulation record to 5-0 with a 52-31 win over Philadelphia last time out. Russell Wilson leads the charge on offense for Seattle, sitting with a strong 97 overall rating, including 86 speed, 90 acceleration and 93 agility as well as 91 throwing power and accuracy at 93 for short passes, 94 for medium passes and 96 for deep passes. Tyler Lockett leads Seattle’s receiving group with an 88 overall mark with 93 catching, 93 speed, 92 acceleration and 97 agility. Chris Carson also has an 86 rating in the backfield for Seattle with 88 speed, 89 acceleration and 91 stiff arm. Defensively, Bobby Wagner is tops with a 98 overall rating, with 96 tackling, 90 impact blocking, 98 power, as well as high-90s marks in play recognition and pursuit. Jadeveon Clwoney isn’t far off on the defensive line at 88 overall with 95 pursuit, 91 play recognition, 87 speed and 90 acceleration.

The Los Angeles Rams come in with a 1-2 simulation record after falling to the Los Angeles Chargers by a final score of 36-31 last time out. Cooper Kupp leads a loaded Rams’ receiving group with an 87 overall rating, including 94 agility and 95 catching while Robert Woods is right behind at 86 overall with 94 catching and Brandin Cooks follows at 85 overall with 95 speed, 92 acceleration and 95 agility. Todd Gurley II leads the Rams in the backfield at 86 overall with 91 speed and acceleration as well as 95 agility and 89 carrying. Defensively, Aaron Donald is one of the few 99 overall rated players, sitting on the Rams defensive line with 90 acceleration, 99 power moves, 96 finesse moves, 97 block shedding, 93 impact blocking and 92 tackling. Jalen Ramsey also plays a big part in the Rams’ secondary at 94 overall with 95 ratings in both man and zone coverage with 92 speed, 93 acceleration and 90 agility.

Tbe Rams have a strong receiving corps and a pretty good set of players on defense, but the fact remains that it hasn’t translated for the Rams in these simulations. These games are a coin flip to begin with, but even still, you never really know what’s going to happen. Even in all of that though, the Seahawks have gone 5-0 and have beaten up on some pretty good competition with the Eagles being their last victim. Until the tickets stop cashing, I don’t see a reason to jump off. I’ll lay the points with Seattle in this one.