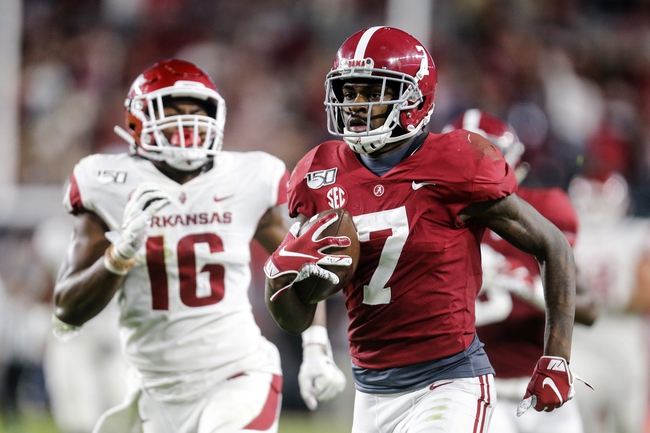 Trevon Diggs is a cornerback from Alabama who is expected to go fairly high in the 2020 NFL Draft. The younger brother of NFL star Stefon, Trevon Diggs projects to be a starter in the NFL within his first couple of seasons and many teams will have their eyes on him come draft day.

College Career: Diggs was a versatile weapon at Alabama, even as a freshman. In his first year with the Tide, he played defensive back, wide receiver and return specialist, finishing with five tackles, 11 receptions for 88 yards and a TD, and 296 total return yards.

In 44 games across four seasons with Alabama, Diggs managed 68 total tackles, four interceptions for 79 yards and a TD, 17 pass defenses, two forced fumbles and two fumble recoveries. He made First Team All-SEC in 2019 and has major experience in big games including the 2018 Sugar Bowl, Orange Bowl and CFP National Championship.

Strengths: Most scouts are pretty high on Diggs; he’s got size, strength and a great nose for the football, utilizing his experience as a receiver to anticipate opponents’ movements. Diggs is physical off the line and excels at jams to throw receivers off their routes.

Despite his size, Diggs’ footwork is solid, and he doesn’t waste a lot of movements when he’s driving toward the ball. He has great instincts with a great pedigree, and whenever he’s on the field there’s always potential for a dazzling interception.

Weaknesses: Diggs’ aggressive play style can sometimes work against him, as he’s been known to react before properly diagnosing a play. He stays a bit too upright in certain routes, and has trouble keeping up with well-executed double moves by an opposing receiver.

On deep throws, Diggs loses position while tracking the football at times, and has issues keeping up with receivers who can maintain top speed for lengthy stretches. Scouts specifically point to the LSU game, where Diggs was picked on by Ja’Marr Chase (who is an NFL-level talent) and had little success there.

Possible Fits: Diggs’ name will likely begin to come up toward the middle of the first round of the draft, specifically right around No. 19 overall. That’s where the Las Vegas Raiders are sitting, and if they get a wide receiver with their first selection (No. 12 overall) they’ll be taking a long look at Diggs in the 19 spot.

Slightly earlier than that, Diggs could potentially go to the Cowboys if they’re not looking LB at that point. Dallas needs a replacement for cornerback Byron Jones, so the add makes sense.

Depending on how things play out on draft day, Diggs could be waiting a while to hear his name called. Some mock drafts have him going in the middle of the second round, but that’s not necessarily a bad thing if he slips that far. Atlanta is sitting at No. 47 overall and will certainly scoop Diggs up if he’s there. The Falcons are a friendly place for aggressive defensive playmakers and Diggs would fit right in on that squad. That said, if the Falcons don't trade up to get him, I don't think Diggs will last that long.