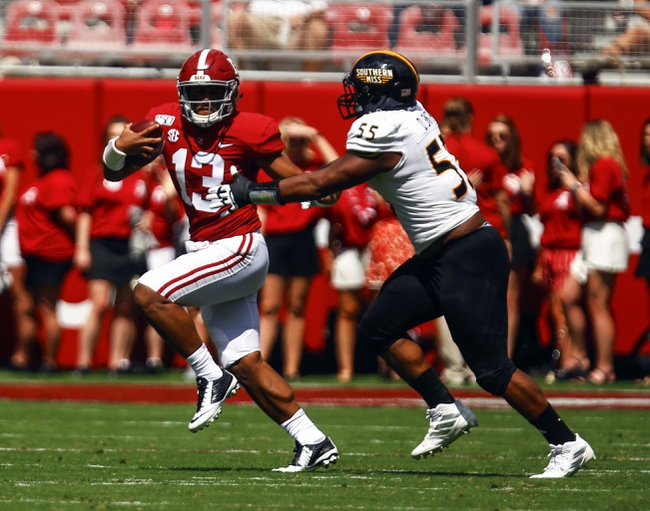 Tua Tagovailoa comes in projected as one of the top picks in the upcoming draft and will most likely join the long list of Alabama first-round draft picks in the Nick Saban era after being part of an Alabama team that their 12th straight 10-win season and a Citrus Bowl win over Michigan.

College Career: Tagovailoa backed up Jalen Hurts for much of the 2017 season, quietly picking up more and more playing time as the season went on before lapping Hurts and taking over as Alabama’s QB in the 2nd half of the 2018 national championship game after a bad first half by Hurts and the rest was history going forward. Tua had a strong 2018 campaign in which he threw for almost 4,000 yards and 43 touchdowns with just 6 interceptions and looked on the way to another great season in 2019 with 2,840 yards, 33 touchdowns and just 3 interceptions before having his season cut short due to a nasty hip injury against Mississippi State.

Strengths: Tagovailoa is one of the stronger pocket passers in the draft, completing 71 percent of his passes in his abbreviated 2019 season. He can beat most defenses with his arm, but he can also get around trouble with his feet and is a big play threat waiting to happen anytime he drops back. There’s also the lineage of playing at Alabama, with the Tide being in so many high profile games, it forces players like Tagovailoa to make clutch plays and more often than not, Tua made those plays and gave him a winner’s mindset that’s going to be key for his confidence at the next level.

Weaknesses: There are some things that Tua can work on, and things that will only get better with real-time experience and gameplay like footwork and mechanics as well as decision-making. Sometimes last year, Tua would wait too long to let the play develop while trying to wait for a receiver to become open, but by the time they were, the pocket had collapsed and the window of opportunity was gone. The main concern for a lot of teams is the hip injury that Tagovailoa suffered against Mississippi State that ended his season in 2019. The main issue is that while Tagovailoa is reported to be ahead of schedule, the injury is drawing comparisons of then-Ravens tight end Dennis Pitta, who had the same injury in 2013. Pitta would return to play but would dislocate the hip the next year and while making a comeback attempt a couple of years later, the hip went again for the 3rd time, effectively ending his career, and there’s concern that Tagovailoa could eventually end up in the same boat.

Outlook/Possible Fit: Had he not been injured for a good chunk of the second half of the season, we could be having an entirely different conversation where Alabama was lifting another national championship trophy being led by their star quarterback Tagovailoa and Tua would be in a 1-2 race with Joe Burrow to be selected 1st overall. Instead, Tagovailoa is projected to go 5th by many, ending up in Miami, and that may be an ideal spot for him in the longrun. Miami’s going to need a franchise pivot sooner rather than later with time running out on Ryan Fitzpatrick at age 37, and Tagovailoa, while most likely ready to start right out of the gate, could use a season of healing and grooming with veteran presence and leadership to prepare him for a lengthy career in the NFL. Any team that drafts him and quite frankly, Tagovailoa himself, will always be looking over their shoulder with the hip injury lurking in the shadows, but Tagovailoa is still a top prospect that’s worth the look as a top-5 pick in the upcoming draft.