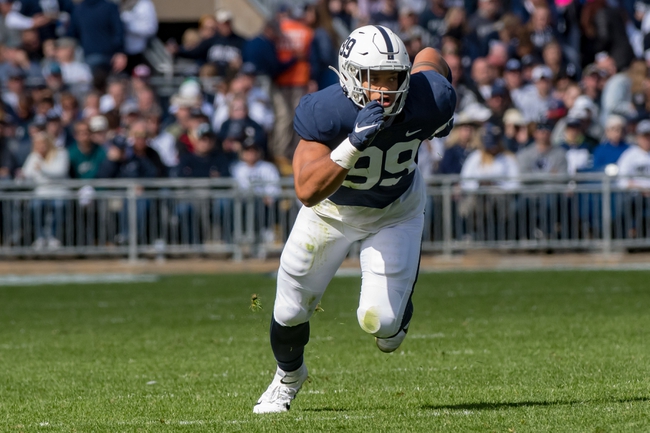 Yetur Gross-Matos is an edge rusher out of Penn State who is projected to be a potential first-round pick in the 2020 NFL Draft. Gross-Matos made First Team All-Big Ten in each of the last two seasons and has some enticing NFL-level skills that will interest many teams when they’re on the clock.

College Career: Gross-Matos was a four-star recruit out of Fredericksburg, Virginia when he entered Penn State. As a freshman, he played in all 13 games, posting 17 tackles and 1.5 sacks.

In three years with the Nittany Lions, Gross-Matos tallied 111 total tackles, 36.5 tackles for loss, 18.5 sacks, two forced fumbles and two fumble recoveries. He ranked number two in tackles for loss (20) in the Big Ten during the 2018 season. Gross-Matos also played in the 2017 Fiesta Bowl, a 35-28 win over the Washington Huskies.

Strengths: Gross-Matos has solid length and is fluid with his movements. He’s quite athletic and can work his way around blockers with relative ease. With a great combination of size and athleticism, Gross-Matos passes the eye test as an NFL edge rusher. When he’s in the backfield, Gross-Matos is all business and keys in on the ball carrier quickly.

He’s got some solid range to the sideline chasing runners as they come out of the backfield, and also has a pretty good rush burst upfield. All in all, Gross-Matos has the size, strength and moves that could turn him into an impact starter in the NFL.

Weaknesses: Some scouts have pointed out Gross-Matos’ hand work as not forceful enough; he’ll need to be more determined and quicker with his movements in the NFL. Some of his techniques are mistimed, and experienced pro blockers will take advantage of that to gain position on the line of scrimmage.

Gross-Matos could also use some work when it comes to disengaging blockers; his pad level is too high at times and that slows him down. A little finesse and technique work would go a long way here.

Possible Fits: Gross-Matos will likely start entering the conversation around No. 18 or so when the Miami Dolphins are on the clock. Most people are assuming the Dolphins will go quarterback with their first pick, then try to fill out the defense with their second (assuming they don't trade down). Miami really needs some pressure off the edge, so Gross-Matos would make sense there, and though the pick is a bit early, the upside is high.

It’s also quite possible Gross-Matos falls into the early second round. The Lions are sitting at No. 35 overall and probably won’t pass on him if he’s still there. A few other teams are picking late in the first round and will take a look at an edge (the Patriots are a possibility), but with the Dolphins loaded up on early picks I think Miami is probably the most likely place for Gross-Matos to find a home.