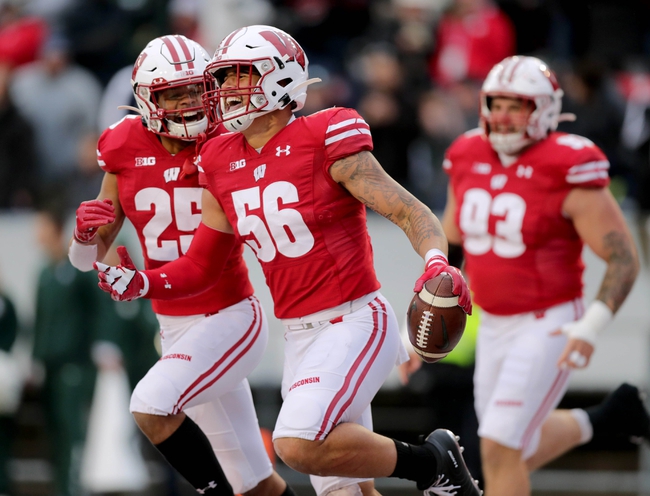 Zack Baun is an outside linebacker out of Wisconsin who is projected as a boom-or-bust prospect in the 2020 NFL Draft. Baun played very well as a quarterback in high school before transitioning to linebacker in his redshirt freshman season with the Badgers.

College Career: Baun broke his left foot heading into his freshman year at Wisconsin, but managed to recover well enough to appear in 12 games that season with 15 tackles, 3.5 tackles for loss and a forced fumble. Although he missed his redshirt sophomore season after re-injuring his foot, Baun became a starter his junior year and was the team’s third-ranked tackler.

After 62 tackles and 2.5 sacks in 2018, Baun continued to develop in 2019 with 76 total tackles, 12.5 sacks, two forced fumbles and an interception. He made First Team All-Big Ten in his last season at Wisconsin.

Strengths: As we said before, Baun is a boom-or-bust NFL prospect. That means he’s quick, explosive, and all-out as a rusher. He’s got quick hands and can punch his way through blockers and he’s also strong enough to cover RBs and TEs on passes in space. The guy is a spark plug who can ignite and galvanize a defense at any moment with a big play.

Baun has great range and is a speedy closer, and he can keep his balance when he’s working through a block. In coverage, he’s shown smooth and fluid movements, and with his quickness he can get to any part of a zone instantly.

Weaknesses: As an edge rusher, Baun is undersized and would probably have only intermittent success against NFL-level linemen. On occasion, he’ll telegraph his rushing intentions with his setup pre-snap, and he can be overzealous in pursuit and miss his target.

Baun needs some more seasoning, technique work and development as a pass rusher, as his successes have come more from athletic prowess as opposed to correct body positioning and leverage.

Possible Fits: Realistically speaking, Baun probably won’t go in the first round of the 2020 NFL Draft. His name will come up immediately once the second round starts however, as there are some enticing spots he could land early on in that round.

Cincinnati is sitting at the No. 33 pick overall (first pick in the second round), and the Bengals definitely need an athletic linebacker to give that group some fire. They may shy away from Baun and opt for a safer pick, however.

If the Bengals decline and go another direction, the Giants are currently at No. 36 overall (pick four in the second round). Baun could fit in with New York as an edge rusher, and his all-out gymnastic moves would inject a jolt to that defense.

There will likely be a run on high-upside defensive players at the beginning of the second round, so expect to hear Baun’s name somewhere in that group.