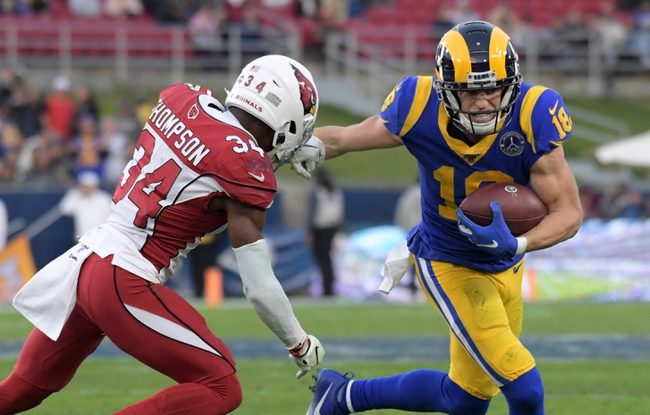 The Los Angeles Rams and the Arizona Cardinals meet in an NFC West division matchup in a Madden 20 NFL simulation game on Friday afternoon.

The Los Angeles Rams come into this game at 1-3 after a second loss to the Seahawks in these simulation games, this one coming in the form of a 43-36 loss to Seattle last time up. Cooper Kupp the Rams’ receivers with an 87 overall rating, including 94 agility and 95 catching while Robert Woods is right behind with an 86 overall grade including 94 catching and Brandin Cooks (who is now a Houston Texan in real life as of Thursday) follows up at 85 overall with 95 speed, 92 acceleration and 95 agility. Todd Gurley II leads the Rams’ ground attack at 86 overall with 91 speed and 91 acceleration ratings as well as 95 agility and 89 carrying. Defensively, Aaron Donald is one of the heralded players with a 99 overall rating, perched on the Rams D-line with 90 acceleration, 99 power move, 96 finesse move, 97 block shedding, 93 impact blocking and 92 tackling. Jalen Ramsey anchors the Rams’ secondary at 94 overall with 95 man coverage and 95 zone coverage with 92 speed, 93 acceleration and 90 agility.

The Arizona Cardinals come into this game looking for their first sim victory after falling to 0-2 in simulation play after a 23-20 loss to the New York Giants last time out. Larry Fitzgerald leads the Cardinals’ offense with an 83 overall rating at wide receiver with 93 catching and 91 catching in traffic while Kenyan Drake is right there at 81 overall in the Arizona backfield with 91 speed, 89 acceleration, 90 agility and 87 carrying. Kyler Murray comes in at 75 overall as Arizona’s starting QB with 91 speed, 92 acceleration and 90 agility as well as 89 throwing power. Defensively, Chandler Jones leads Arizona with a 90 overall rating, including 92 power move and 86 tackling while Patrick Peterson is at 92 overall with 92 speed, 92 acceleration, 95 agility and 89 man coverage at corner.

It’s probably safe to say that a loss to the Giants doesn’t look good on the Cardinals record after you look at the way the Giants have been getting blown out by teams like New England and Dallas, and the Rams have battled hard against the Seahawks in two games against Seattle, who have been the best sim team by far since these games have started, going 6-0. However, while these games are coin flips for the most part, it’s evidently clear that the game isn’t too high on the Rams either, as Los Angeles just can’t keep points off of the board when they’re scoring and can’t score when the defense holds up their end. I wouldn’t be surprised if the Rams put up a huge game here, but I need to see more from L.A. before instilling confidence in them going forward. Arizona has some decent players on this team, so I’ll take a shot with the Cardinals and the points here.