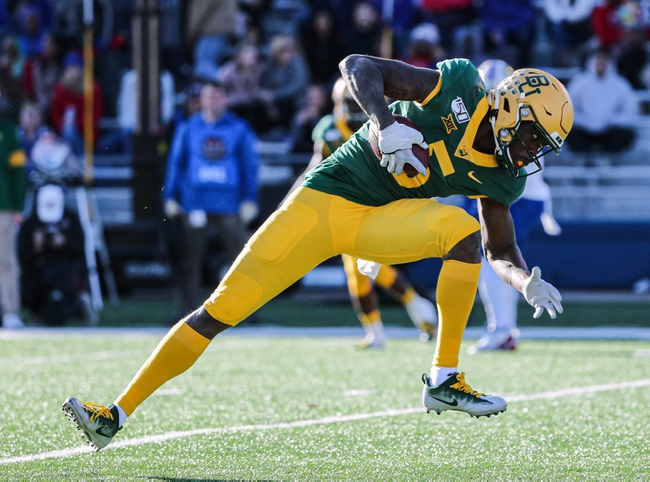 Denzel Mims is a wide receiver out of Baylor who is projected to be a potential first-round pick in the 2020 NFL Draft. Mims played high school football in Daingerfield, Texas and comes from a family stacked with talented players. Come draft day his name will come up very early.

College Career: As a true freshman at Baylor, Mims played in 11 games, posting four receptions for 24 yards. During his sophomore year, Mims became a starter (in 11 of 12 games) and put up 61 receptions for 1,087 yards and eight touchdowns.

Strengths: Mims has a good combination of size and speed that NFL scouts salivate over. He has good leverage making breaks in his routes, and he can easily lose cornerbacks who are just going through the motions. Mims is solid at tracking the football while it’s in the air, and he’s able to adjust his position in order to make the catch.

On high passes, Mims is good at pulling down 50/50 throws and is able to snatch the ball away from defenders with his full-body extension. His catch radius is impressive, and Mims is adept at reaching back-hip throws or passes that are slightly off target.

Weaknesses: When Mims is pressed, he doesn’t display a great quickness in sliding past and he sometimes gets hung up with the cornerback. His upfield push off the line isn’t quite fast enough, and he needs to work on fine-tuning his routes to elicit more attention from safeties on bait plays. Mims needs more physicality at the top of his routes so he can push his way through traffic and avoid those contested catches. A more intense sense of urgency would go a long way here.

Possible Fits: Some mock drafts have Mims’ name coming up in the middle of the first round, so you can expect to hear conversations about him early on draft day. One trendy pick for a Mims landing spot is Denver at No. 15 overall. The Broncos are consciously trying to reshape a tepid offense, and they’ve made some big strides toward that during the offseason. Mims’ power and speed would be a nice addition to that group.

If Mims lasts until late in the first round (which he probably won't), I’d imagine the Packers will scoop him up at No. 30 overall. Green Bay is expected to be kicking the tires on a lot of receivers in this draft, as that’s their only glaring need right now. I doubt the Pack would pass on Mims if he’s there at 30.

That said, Green Bay’s NFC North rivals the Vikings could very well be players on Mims as well. Minnesota is sitting at No. 25 overall and could snatch him away before the Packers get on the clock. Regardless of where Mims goes, it’ll be an interesting storyline on draft day.