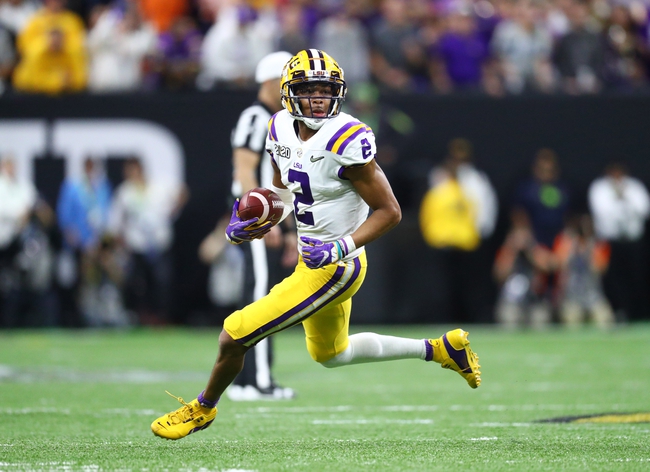 Justin Jefferson enters the 2020 NFL Draft as one of the top receivers in one of the top wideout draft classes in NFL history, fresh off of a strong year, leading the LSU Tigers back to the college football promise land and a national title as one of LSU’s strongest offensive weapons this season.

College Career: Jefferson got off to a bit of a slow start as a freshman, logging just a single rushing attempt for 4 yards, but Jefferson took a big step forward in 2018, logging 875 receiving yards with 54 catches before breaking out in 2019, logging 1,540 receiving yards and 18 touchdowns with a team-leading 111 receptions as one of the strongest weapons in LSU’s artillery this season on the way to the national championship.

Strengths: There’s a lot to like about Jefferson from a pro standpoint at wide receiver, and while his 6’1” frame may not be the tallest stature out there, Jefferson has shown some strong athleticism boasting a 37.5 in vertical jump at the combine while also owning a very good set of hands and some precise body control that allows him to win the jump balls downfield and in contested situations. Jefferson can also reach the ball at it’s highest point more often than not, making him as dangerous of a threat in the red zone as he was in the 2019 season for the Tigers. Jefferson was also highly regarded for his work ethic and loves challenging everyone around him to make them better and raise their level of competition.

Weaknesses: The knock on Jefferson is that he doesn’t have the elite level speed of other receivers ahead of him, like a Jerry Jeudy, Henry Ruggs III or CeeDee Lamb, speed that would make him a downfield speed/deep ball threat like those three, and that Jefferson would be better off serving as a team’s #2 receiver so that he could work in and take advantage of a lot of single coverage.

Outlook/Possible Fit:If there’s a team that would draft Jefferson as a #1, based on team needs and draft position, and unless they move up to take a Jeudy or Lamb, I could see the Philadelphia Eagles taking a shot on Jefferson. Alshon Jeffery can’t stay healthy, and you’d have to think that DeSean Jackson’s time with the Eagles will come to a close fairly soon. A better fit I think would be the New Orleans Saints if the Saints are able to grab Jefferson at #24, or move up to pick him in the top-20. The Saints have a veteran arm in Drew Brees and a strong #1 receiver in Michael Thomas while also bringing in Emmanuel Sanders via free agency. Bringing Jefferson into an elite offense like that gives him a year to get his feet wet with a quarterback that can get him the ball and integrate him into one of the NFL’s top offensive units while also giving Jefferson the position and the time to grow into a top receiver down the line.