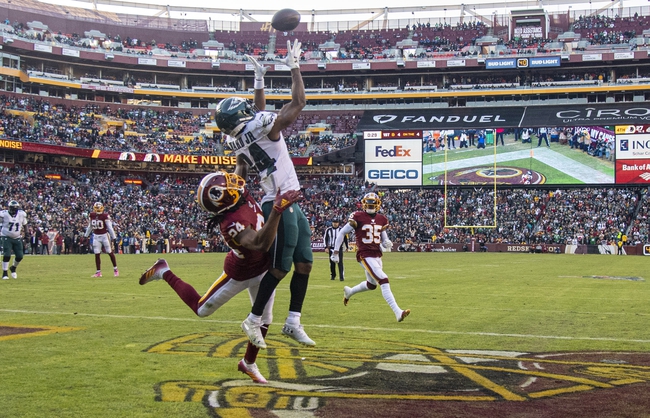 The Philadelphia Eagles host the Washington Redskins in an NFC East division matchup in a Madden 20 NFL simulation game on Friday afternoon.

The Washington Redskins enter this game with a simulation record of 1-1 after a 31-13 loss to Denver in their last outing. Washington’s strength is on their offensive line, with Trent Williams coming in at 92 overall with 95 strength, 92 pass block and 93 run block while Brandon Scherff is at 88 overall with 90 run block and 92 strength. Jordan Reed comes in as the top skill position player for Washington at 84 overall with 87 catching and 87 catching in traffic. Terry McLaurin comes in at 81 overall and Derrius Guice leads the running back duties at 80 overall, sharing the load with Adrian Peterson who comes in at 79 overall. Dwayne Haskins Jr. remains the Redskins’ top option at QB despite a 70 overall rating. Defensively, Matt Ioannidis leads the Redskins with an 85 overall rating with 86 acceleration and 86 strength to go along with 84 tackling and 89 power moves while Ryan Kerrigan is right behind at 84 overall at outside linebacker with 88 power move, 88 impact blocking and 86 acceleration.

The Philadelphia Eagles come into this game with a simulation record of 2-1 after picking up a 52-31 loss to the Seattle Seahawks in their last game. Zach Ertz leads the Eagles’ offensive attack with a 90 overall rating, including 87 acceleration with 93 catching while Alshon Jeffery and DeSean Jackson make up the Eagles’ top wide receiver duo at 85 and 84 overall. Carson Wentz is under center at 83 overall while Philly has a strong right side of the offensive line with Jason Kelce at center at 94 overall, Brandon Brooks at 93 overall at right guard and right tackle Lane Johnson at 89 overall. Defensively, Fletcher Cox heads the Eagles’ pass rush at 95 overall with 95 strength, 93 tackling and 96 power move while Brandon Graham is at right defensive end at 87 overall with 90 power move and 93 impact blocking. Malcolm Jenkins leads the Eagles’ secondary at 86 overall with 91 acceleration, 90 agility and 88 zone coverage.

There’s not an overly large sample size on the Redskins, so it’s hard to gauge what we’ve seen from Washington in these sim matchups. Philadelphia was throttled by Seattle, but the Seahawks are a beast in these sims, going 6-0 so far, so that’s not a bad loss really, and the Eagles have done well in their other two matchups. I just think the Eagles are the better built team side-by-side, and while these sim games are coin flips no matter what the line is, I think the Eagles win this one by at least a touchdown so I’ll lay the points here.