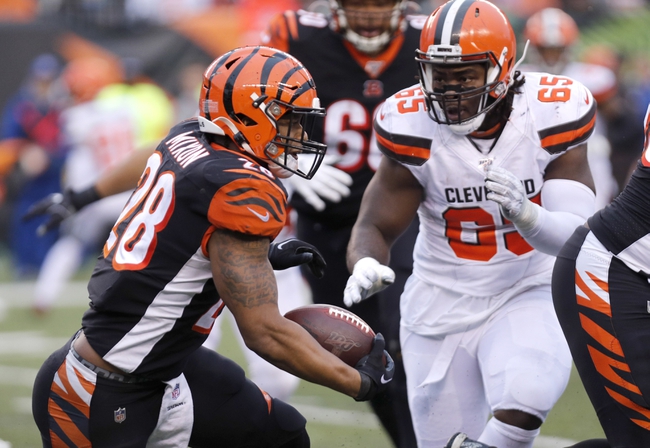 The Cleveland Browns and the Cincinnati Bengals meet in an AFC North division matchup in a Madden NFL 20 simulation game on Saturday morning.

The Cleveland Browns will look to rebound after their first simulation loss after a 49-14 beatdown defeat at the hands of Pittsburgh last time out. Nick Chubb leads Cleveland’s offense with a 92 overall rating, with 92 speed, 91 acceleration and 85 strength grades. Odell Beckham Jr. is the top receiver for the Browns, rated 90 overall with a 99 rated spectacular catch as well as 91 in catching in traffic and a 98 mark in ball carrier vision. Beckham Jr. also has 94 attribute ratings in speed and acceleration and 98 agility. Kareem Hunt comes in at 88 overall at running back, with 90 speed and 92 acceleration and 92 agility along with a 98 carrying rating. Baker Mayfield comes in at quarterback with a mark of 76 overall including 93 throwing power, 87 short pass accuracy and 85 long ball accuracy. On defense, Myles Garrett is the leader with a team-high 93 overall rating at defensive end, with 85 speed, 90 acceleration and 96 strength as well as a 95 power move rating.

The Cincinnati Bengals come into this one sitting with a simulation record of 0-2 after a 48-13 loss to these same Cleveland Browns last time out. A.J. Green leads the Bengals with a 90 overall rating at wide receiver, with 90 speed and 92 agility with 92 catching and 96 grades in catching in traffic and spectacular catch. Joe Mixon comes in with an 87 overall rating with 91 speed and 93 acceleration while Tyler Boyd is 83 overall at wide receiver and Andy Dalton has to get them the ball, but only has a 72 overall rating to work with. Defensively, Geno Atkins leads the Bengals on the defensive line at 88 overall with 90 strength, 89 impact blocking and 90 power move. Carlos Dunlap is also at 82 overall on the defensive line while William Jackson leads the secondary at 81 overall.

This is hard for me to stomach considering it’s a simulation and I’m being asked to lay double digits pretty much with the Browns of all teams. However, while Green and Mixon are talented and have strong ratings, I don’t have much faith in Dalton to get them the ball and for the defense to hold up their end of things. Cleveland has Mayfield who isn’t a whole lot better, but Cleveland already beat the Bengals by 5 touchdowns just over a week ago and the ratings haven’t really changed. I’ll lay the points with Cleveland in this spot.