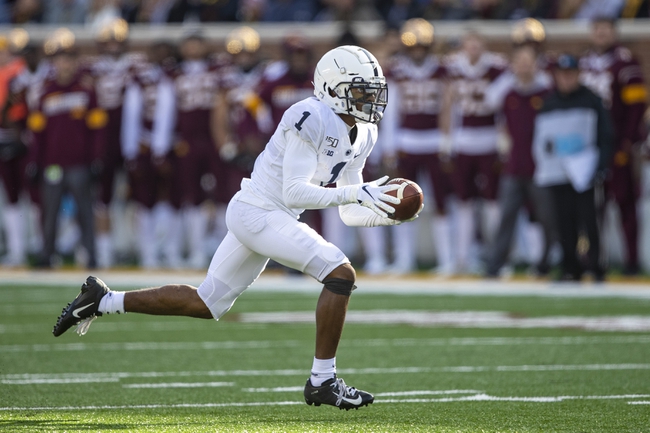 K.J. Hamler is a wide receiver from Penn State who is projected to be a second-round pick in the 2020 NFL Draft. Despite suffering an ACL injury coming into college, Hamler posted some nice numbers out of the slot for the Nittany Lions and has the skills to develop into a potent NFL weapon.

College Career: Hamler had to redshirt as a freshman at Penn State due to his injury, but he got going in his sophomore season, posting three catches for 67 yards and a TD in his very first collegiate game. Hamler ended 2018 with 42 receptions for 754 yards and five touchdowns, as well as a rushing score.

In 2019, Hamler improved even more with 56 receptions for 904 yards and eight touchdowns. He also rushed 13 times for 43 yards during that season, and made Second Team All-Big Ten at the end of the year.

Strengths: The speedy Hamler has big-play capabilities out of the slot, and can stretch a defense with ease. He’s got great explosive power off the line and has shown he can find separation with a burst of speed that outruns the coverage. Hamler can stay in top gear for plenty long enough to get open downfield on deep routes.

Hamler has some great natural athleticism, dodging and weaving to make tacklers miss as he gains yards after the catch. He’s also a competent ball-carrier and a potent weapon on gadget plays.

Weaknesses: Hamler’s body type is a bit on the small size, which has led some scouts to question his durability. He could stand to tighten the screws on his route-running as well; his turns and balance throw him into sloppy positioning at times, and when he gets into traffic he can lose his way.

Scouts have also raised issue with Hamler’s ball tracking and hand-eye coordination; he ended plays with ill-advised cradle catches at times during the 2019 season. All things considered however, Hamler has some promising natural gifts.

Possible Fits: Several mock drafts believe they’ve found the perfect place for Hamler, and that’s right around the middle of the second round. The Cowboys are sitting at No. 51 overall, and there’s a strong sentiment that they might go for a speedy, explosive receiver there. Hamler certainly fits that bill. He could be a great young slot receiver with Dallas, and he’d generate some immediate electricity for that offense.

Provided the Cowboys pass on Hamler (and I don’t think they would in that situation), he’s got a potential home a couple of picks later with Philadelphia at No. 53. It could work into an interesting NFC East storyline come draft day. The Eagles really, really need receivers right now, and the general thinking is that they’ll stuff themselves with WRs in this draft. Hamler would fill a much-needed role in Philly.