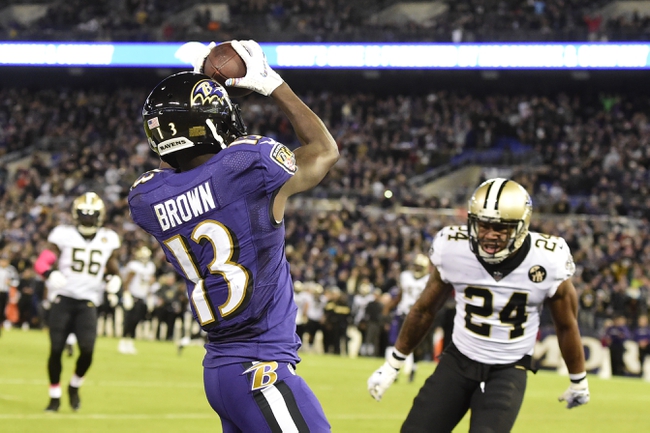 The Baltimore Ravens and the New Orleans Saints meet in a Madden 20 NFL simulation game on Saturday night.

The Baltimore Ravens will try to bounce back from their first simulation loss after a 34-17 against the Pittsburgh Steelers in their last game. Lamar Jackson leads the Ravens at QB with a 92 overall rating, with 92 throw power and 92 short pass accuracy to go along with 96 speed, 96 acceleration and 95 agility. Mark Ingram II checks in at 86 overall with 88 speed, 91 acceleration and 89 carrying while Mark Andrews is right behind at tight end with an 85 overall grade. Defensively, Earl Thomas leads the way with a team-high 93 overall mark, including 92 jumping and 96 zone coverage at free safety. Michael Pierce is a solid 91 overall on the defensive line with 94 block shedding and 90 impact blocking while Marlon Humphrey and Marcus Peters impose a strong cornerback duo for Baltimore. Humphrey sits at 89 overall with 90 man coverage, 92 speed and 93 acceleration while Peters has 87 man coverage, 91 speed and 91 acceleration.

The New Orleans Saints come in at 2-2 in the simulation games after a 45-24 win over Minnesota last time out. Michael Thomas is one of the heralded 99 overall players with 89 speed, 92 acceleration and 92 agility as well as 99 catching, 98 catching in traffic and 97 spectacular catch with 96 release and 93 jumping. Drew Brees checks in at 94 overall with 99 short pass accuracy, 97 medium pass accuracy and 91 deep ball accuracy under center for New Orleans. Alvin Kamara leads the Saints’ backfield with an 89 overall rating, including 94 acceleration, 93 agility, 90 carrying and 90 juke while Jared Cook is at 87 overall with 90 acceleration and 85 catching. On defense, Cameron Jordan leads the way at 92 overall with 92 impact blocking, 89 tackling and 94 finesse move. Demario Davis is at 89 overall at outside linebacker with 90 play recognition and 90 pursuit as well as 86 speed and 89 acceleration. Marcus Williams and Marshon Lattimore also make up a big part of the New Orleans secondary at 86 and 85 overall.

I’ve gone back and forth on this game and these guys really do save the best for last. With that said, even in these sim games, I’m trying to find value, and even though Baltimore and a low line is tempting, we’re getting free points with New Orleans with a 99 receiver in Michael Thomas and a 94 QB in Drew Brees with guys like Alvin Kamara and Jared Cook as well. The Saints’ defense isn’t bad either. Baltimore’s defense is outstanding and Lamar Jackson’s a stud in the game, but I just like the sound of New Orleans getting points here.