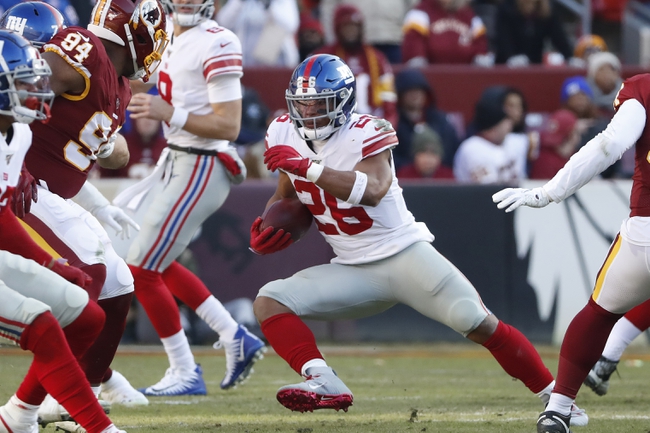 The Buffalo Bills and the New York Giants meet in a Madden 20 NFL simulation game on Saturday afternoon.

The Buffalo Bills come into this game looking to get out from under the goose egg, sitting at 0-3 in simulation matchups after a 38-16 loss to New England last time out. Cole Beasley and John Brown lead Buffalo’s offense with both receivers coming in at 83 overall, with Brown being the speedier of the two with 92 speed and 90 acceleration while Beasley has 92 agility. Frank Gore and Devin Singletary share backfield duty at 80 overall, while Josh Allen comes in at 77 overall at quarterback. Defensively, the secondary is Buffalo’s greatest strength with Micah Hyde and Tre’Davious White at 88 overall, with White owning 91 speed and 93 acceleration at cornerback while Hyde has a 91 zone coverage rating at free safety. Jordan Poyer is 85 overall at strong safety while Lorenzo Alexander is a decent 83 overall at one of the outside linebacker spots.

The New York Giants will be trying to rebound from yet another beatdown loss, falling to New England by a score of 40-7. Saquon Barkley leads the Giants on offense with an 89 overall grade, with 92 speed, 93 acceleration, 96 agility, 94 carrying and 94 juke. Evan Engram leads New York’s receiving group at tight end at 88 overall with 88 catching, 90 speed and 91 acceleration. Golden Tate III and Sterling Shepard make up a fairly decent wide receiver duo with each logging 90 speed and 91 acceleration with Tate III having 89 catching compared to Shepard’s 88. On D, Leonard Williams is the only 80+ overall rated player on that side of the ball for New York at 82 overall with 88 tackling and 88 impact blocking.

I’m not trying to figure either one of these sides out right now, especially in a simulated game where anything and everything can happen. While New York’s defense has been getting beat up, the offense hasn’t done much, and Buffalo’s offense hasn’t been much to write home about either, putting up just 13 points per game in their last two losses. Even for a simulation, this total between these two teams seems high. I think this is a game that barely reaches 45 points if it does, so I’m siding with the under in this ugly matchup.