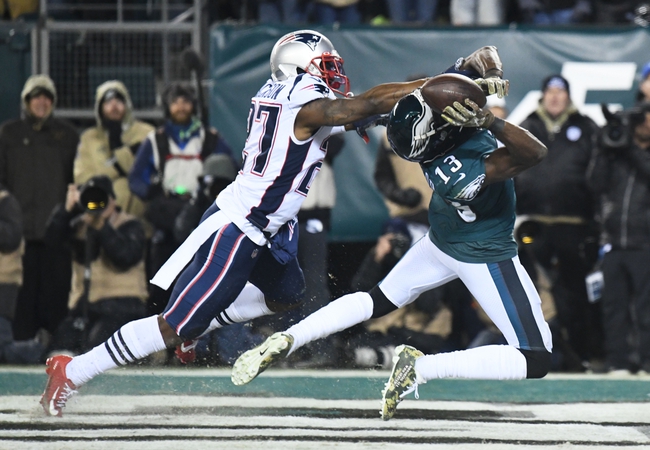 The New England Patriots and the Philadelphia Eagles meet in a Madden 20 NFL simulation game on Saturday evening.

The New England Patriots will look to bounce back from having a three-game sim winning streak snapped, falling to 4-2 in simulation play with a 33-32 loss to the Chargers in their last game. Tom Brady leads the Patriot offense at 91 overall with 90 throwing power and 96 short pass accuracy while his top receiver, Julian Edelman is the top rated pass-catcher at 87 overall with 91 acceleration and 91 agility in addition to 85 catching. James White leads the Patriot backfield at 83 overall with 89 speed, 92 acceleration and 90 agility. On defense, Stephon Gilmore leads New England with a 98 overall rating, including 99 awareness and 92 speed with 94 acceleration and 94 agility while also putting up a 98 mark in man coverage and 96 in zone coverage. Devin McCourty is also in the New England secondary at 92 overall with 93 zone coverage and 90s in speed, agility and acceleration and Dont’a Hightower anchors the linebacking group at 88 overall with 91 impact blocking and 92 tackling as well as 93 play recognition and 93 pursuit.

The Philadelphia Eagles will try to build on their 3-1 simulation record after a 26-20 overtime win over the Redskins in their last game. Zach Ertz leads the Philly’s offense with a 90 overall rating, including 87 acceleration and 93 catching while Alshon Jeffery and DeSean Jackson make up the Eagles’ top wide receiver tandem at 85 and 84 overall respectively. Carson Wentz is quarterbacking at 83 overall while Philadelphia has a strong right side of the offensive line with Jason Kelce at center at 94 overall, Brandon Brooks at 93 overall at right guard and right tackle Lane Johnson at 89 overall. Defensively, Fletcher Cox heads Philadelphia’s pass rush at 95 overall with 95 strength, 93 tackling and 96 power move while Brandon Graham is at right defensive end at 87 overall with 90 power move and 93 impact blocking. Malcolm Jenkins leads the Eagles’ secondary at 86 overall with 91 acceleration, 90 agility and 88 zone coverage.

Philadelphia hasn’t been in a ton of high scoring games, but the Eagles are still pretty good even for the video game. New England on the other hand hasn’t had much of an issue putting points up, but the defense lacks here and there, and the Eagles have the talented players to exploit that. Either way, I’m siding with the over here. I think both sides break 28 points when all is said and done and this total easily soars well over 60 points.