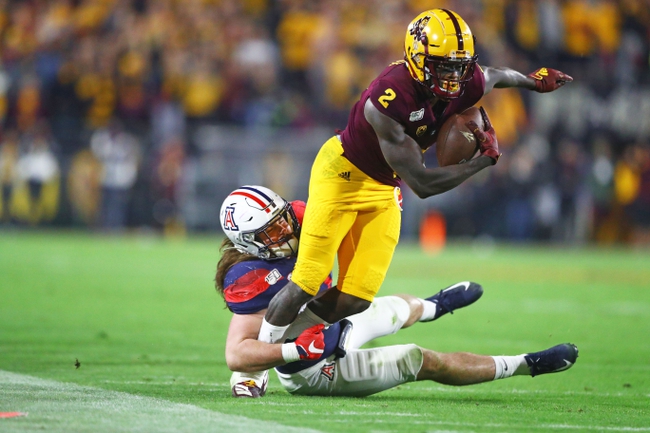 Brandon Aiyuk is a wide receiver from Arizona State who is projected to be an early-round selection in the 2020 NFL Draft. Aiyuk is expected to be an eventual starter in the NFL, and with his return specialist skills he’ll generate interest from several different teams when they’re on the clock.

College Career: Aiyuk spent his first two seasons with Sierra College, racking up 89 catches for 1,533 yards and 19 touchdowns during his time there. Once he transferred to Arizona State, Aiyuk continued to blossom with 33 catches for 474 yards and three touchdowns his junior season.

In 2019, Aiyuk really broke out statistically with 65 receptions for 1,192 yards and eight touchdowns to lead the Sun Devils. He also showcased his return skills, bagging 226 yards and a TD on punts and 446 yards with a 31.9-yard average on kickoffs. Aiyuk made First Team All-Pac-12 last year as well.

Strengths: Aiyuk has shown some great natural ability over the last few years, and he’s continuing to get better with every season. He’s got great energy out on the field, and with his quick feet he can burn off-man coverage. Aiyuk has a nice separation burst at the top of his routes, and his long arms make for a large catch radius.

When it comes to key plays and first downs, Aiyuk is the way to go. He has major yards after catch capability, with a nose for the markers and pylons. If he gets into space, Aiyuk is very dangerous.

Weaknesses: The major knock on Aiyuk is his physicality. He’s going to have to get better at bringing down contested throws, and could probably use some more finesse on his routes. He doesn’t always keep his head up on anticipatory throws and can sometimes lose the football.

An aggressive corner can throw Aiyuk off his game; press-man and physical downfield coverage really stifle his abilities. Some technique work with body positioning in traffic would go a long way here as well. A good coaching staff will help Aiyuk highlight his natural abilities.

Possible Fits: It’s looking like we’ll start hearing Aiyuk’s name early in the second round of the 2020 NFL Draft. Jacksonville is sitting at No. 42 overall, which is a good spot to pick up a high-upside playmaker like Aiyuk. The Jaguars are consciously polishing up their offense this offseason, and he’d be a great addition there.

That said, Aiyuk may not even make it down that far. Earlier in the second round at No. 34 overall are the Colts, and it’s generally expected they’ll be taking a hard look at a wide receiver with that pick. Indianapolis needs another complementary player for TY Hilton and Zach Pascal, and Aiyuk could function as an effective slot receiver with that crew.