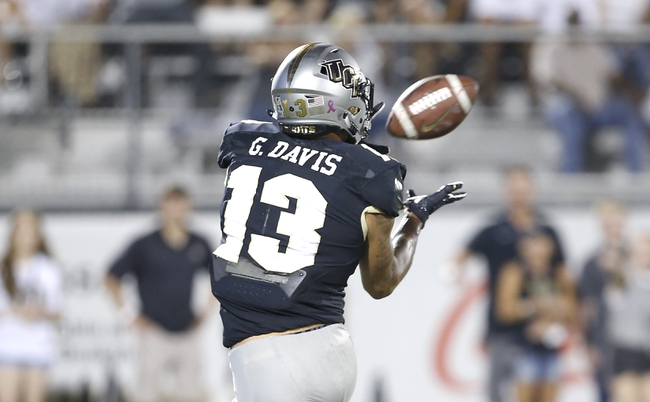 Gabriel Davis is a wide receiver from the University of Central Florida, and he’s expected to be a mid-to-late-round selection in the 2020 NFL Draft. Davis may need a bit more seasoning to be effective at the NFL level, but he’s an intriguing high-ceiling prospect for teams looking to fill out their receiving corps.

College Career: After playing high school ball in Sanford, Florida (where he logged 69 catches for 1,347 yards and 17 touchdowns in his senior season), Davis didn’t have to relocate far to join UCF. He started all 13 games in his true freshman season with the Knights, posting 27 catches for 391 yards and four scores.

Davis got better in his sophomore season with 53 catches, 815 yards and seven TDs. He made First Team All-AAC in 2019 following a junior year of 72 catches, 1,241 yards and 12 touchdowns. Davis elected to forego his senior campaign and enter the 2020 NFL Draft.

Strengths: Davis’ big production in 2019 will certainly turn a lot of NFL heads; he had multi-touchdown games five times in that season. Davis is a sizable target with good power in his hands, and his reception technique is pretty solid. He’s got a nice catch radius and can track long throws well when he goes deep.

Davis’ physical strength is perhaps his best asset; he has a solid jab move and can hold his own as a blocker in pretty much any scenario.

Weaknesses: Davis needs to clean up some of his route-running techniques; he gets hung up doing stutter steps and is timid off the snap at times. His hips are too tight going into breaks and he’ll need to work on fluidity if he’s going to fit into those slim NFL throwing windows.

After the catch, Davis is seen as below average. He has a fairly limited range of routes at his disposal and seems to ease up on plays where his number isn’t called. There’s some NFL potential here, but Davis certainly needs some polish work on the practice field.

Possible Fits: Davis will likely come into the NFL Draft conversation around the fourth round or so. Teams will be looking for high-upside guys, role-players and those proverbial diamonds in the rough; he certainly fits the bill there.

Many mock drafts have a run on wide receivers in the fourth round, and Davis’ name is often lumped in with those. Tampa Bay is sitting at No. 117 overall and that would be a good place for him to go. Davis would stay in Florida if he goes to the Bucs, and the familiarity there would be beneficial.

If Davis slides down a bit further into the fifth round, some projections out there have him going to Detroit. The Lions are attempting to pump up their offense in a competitive division, and Davis could help add some depth to that passing game.