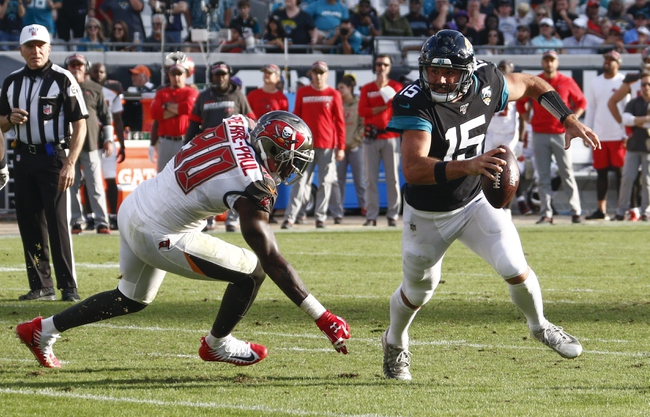 The Tampa Bay Buccaneers and the Jacksonville Jaguars meet in a Madden 20 NFL simulation game on Sunday morning.

The Tampa Bay Buccaneers will be looking for their first simulation win after falling to 0-4 in sim play after a 45-27 loss to the Raiders in their last outing. Mike Evans and Chris Godwin lead Tampa Bay’s offense in the Bucs’ receiving corps with Evans owning a team-high 92 overall rating with 90 catching, 95 catching in traffic and 97 spectacular catch while Godwin sits at 87 overall with 97 catching. Someone has to throw them the ball, and for the time being, it’s Jameis Winston at 78 overall. Defensively, Lavonte David leads Tampa Bay with a 90 overall rating, with 92 pursuit, 87 block shedding, 88 impact blocking and 89 tackling. Ndamukong Suh leads the pass rush at 86 overall with 93 impact blocking and Vita Vea is right behind at 85 overall with 91 impact blocking.

The Jacksonville Jaguars will look to rebound from their first simulation loss in the form of a 27-20 loss to Indianapolis in their last outing. Leonard Fournette leads the jaguars on offense with an 83 overall rating with 92 speed and 96 carrying. D.J. Chark Jr. sits at 81 overall in the receiving corps with 91 catching as well. On defense for Jacksonville, each level of defense has an 84 overall rated player at the level with A.J. Bouye leading the secondary, Telvin Smith in the linebacking group and Yannick Ngakoue on the pass rush up front. Bouye boasts an 89 speed rating with 94 acceleration and 91 agility while Smith has 87 speed with 89 acceleration and 88 agility.

It’s easy for me to just jump on the Jaguars considering they’ve won a game and already won a game over the Bucs, which is more than I can say for Tampa Bay at this point. However, from watching these games, Jameis Winston has been playing well, it just hasn’t gone Tampa Bay’s way. You also get the feeling that Tampa Bay’s due for a win and Jacksonville isn’t really a team that’s been lighting the world on fire in these simulations and the Jaguars are more than capable of putting up a clunker. I’ll take a shot with the Buccaneers and the points here.