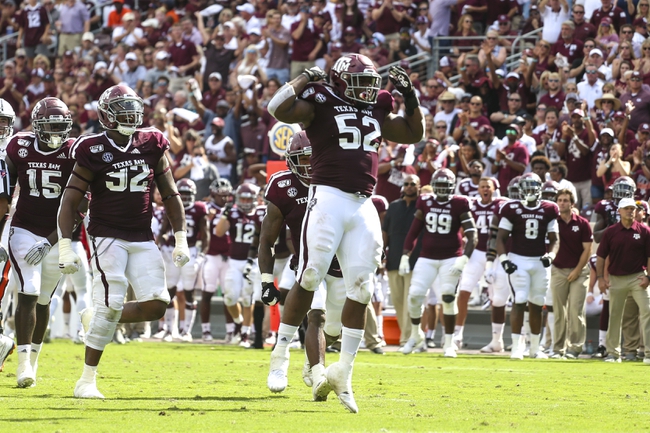 Justin Madubuike is a defensive tackle out of Texas A&M, and he’s projected to be an early-round pick in the 2020 NFL Draft. Madubuike has solid NFL-level skills and could very well become a starter in the league within his first couple of seasons.

Madubuike’s junior season featured another increase in production with 45 total tackles, 5.5 sacks, a forced fumble and an interception. After making Second Team All-SEC in 2019, he chose to forego his senior year with the Aggies and enter the 2020 NFL Draft.

Strengths: Madubuike isn’t the biggest or strongest tackle out there, but he has really clean technique and leverage work which will benefit him greatly at the professional level. His relatively small stature enables Madubuike to fit into slim gaps, and he’s got quick hands with a nice spin-counter move. All of that helps him get into the backfield with regularity.

Madubuike is fast enough to pursue quarterbacks out of the pocket, and his quick burst skills help him shut down runners. When he's able to work his way past the offensive line, Madubuike is dangerous in the backfield and a very disruptive force for the opposition to deal with.

Weaknesses: The major knock on Madubuike is that he’s undersized. He doesn’t have the strength or reach of an ideal NFL tackle, and his lean frame could be a liability. At times Madubuike is late coming off the snap, and he gets smothered by double teaming blockers. A stiff-arm punch at the beginning of a play can really knock Madubuike off his intended path.

He’ll need some work on his consistency from snap to snap, and in order to be successful Madubuike is going to need razor-sharp focus on his technique.

Possible Fits: Madubuike is projected to fit in somewhere around the second round of the 2020 NFL Draft. Many mocks have a run on edge rushers and D-line guys in that area, and he should be a part of that blitz if that is indeed how things shake out.

The Vikings are sitting at No. 58 overall, and Madubuike would make a great addition to that group. Minnesota really needs some help with their interior defensive line, as they didn’t get much going in the way of pressure last season.

If Madubuike slips a little further down, he’s got another potential home elsewhere in the NFC North. Detroit is No. 67 overall, and they’re expected to grab a handful of defensive guys in this draft. Madubuike could be a nice addition to the Lions as they retool that side of the ball.