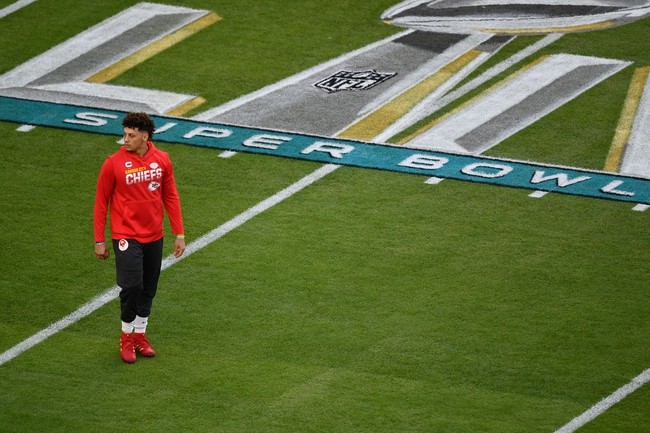 The Kansas City Chiefs and the San Francisco 49ers meet in a Super Bowl rematch in a Madden 20 NFL simulation game on Sunday night.

The Kansas City Chiefs will look to build on back-to-back wins after a 40-33 win over Seattle in their last game. Patrick Mahomes comes in as one of the highly-touted 99 overall rated players, with 96 throwing power in addition to 97 short pass accuracy, 95 medium pass accuracy and 93 deep pass accuracy. Tyreek Hill isn’t off from the top of the pack at 96 overall, with a 91 attribute rating in catching as well as 97 juke, 99 speed, 99 acceleration and 98 agility. Travis Kelce is 96 overall also as KC’s top tight end with attributes of 99 awareness, 85 speed. 91 catching in traffic and 91 catching overall. On the defensive side of the ball,  Chris Jones and Tyrann Mathieu share the team-high on the Chiefs defensive unit with Jones leading the pass rush at 92 overall with 91 strength, 90 tackling, 89 finesse move and 95 power move while Mathieu anchors KC’s secondary at 92 overall with a 90 man coverage rating as well as 89 in zone coverage while also being rated at 90 speed, and 92 in acceleration and 92 agility.

The San Francisco 49ers will look to build on a 26-20 win over the Tampa Bay Buccaneers last time out. George Kittle remains the top skill player in the 49ers’ offense as a 97 overall rated tight end with a 98 catch rating while Emmanuel Sanders comes in as the top receiver for the Niners at 89 overall with 94 catching, 92 acceleration and 93 agility. Jimmy Garoppolo is under center at 84 overall while Tevin Coleman is right behind at running back at 82 overall with 93 speed, 92 acceleration and 93 agility. On defense, Richard Sherman leads the way at 94 overall at corner, with 99 awareness as well as 98 jumping, 90 man coverage and 99 zone coverage. Nick Bosa comes in on the pass rush at 89 overall with 91 finesse move and 91 acceleration. The 49ers defense also has four more defenders with at least an 85 overall rating, including DeForest Buckner, Fred Warner, Arik Armstead and Dee Ford.

I said before that I was waiting for signs of life from the Chiefs before putting any faith in them after resounding wins over the Chargers and then-undefeated Seattle Seahawks, I finally have my sign. It’s a bit alarming how many points the Chiefs have allowed, but San Fran really hasn’t been scoring all that well in the simulations to make me think they can keep pace here. Yes, it’s a simulation and a super bowl rematch at that, but I still think the Chiefs get it done here. I’ll lay the points with Kansas City in this one.