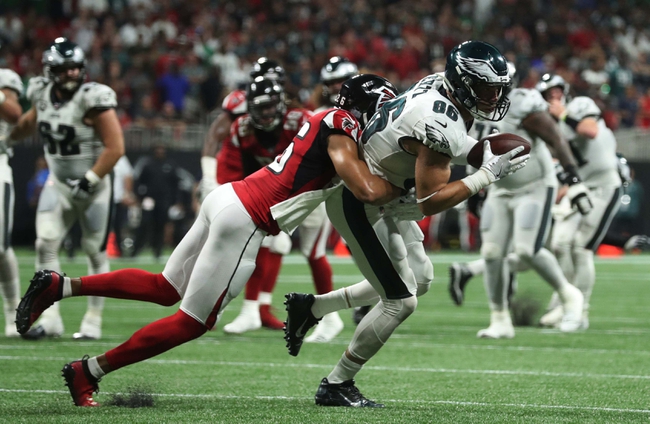 The Atlanta Falcons and the Philadelphia Eagles meet in a Madden 20 NFL simulation game on Sunday afternoon.

The Atlanta Falcons will be out to rebound from back-to-back sim losses after a 33-30 loss to Green Bay last time out. Julio Jones leads the Falcons at 97 overall, with 92 speed and 94 agility to go along with 96 catching, 95 catching in traffic and 98 spectacular catch. Austin Hooper is at 89 overall at tight end with 97 catching while Matt Ryan comes in at 87 overall at QB and Devonta Freeman rounds out the three-pronged attack in the backfield with an 85 overall grade with 92 speed and 94 agility. On defense, Grady Jarrett leads Atlanta’s defense at 90 overall with 89 strength, 90 block shedding and 93 power move while Deion Jones is the top linebacker at 86 overall with 89 pursuit, 90 speed and 91 acceleration. Keanu Neal and Desmond Trufant anchor the secondary at 85 and 84 overall respectively with Trufant logging 92 speed, 93 acceleration and 96 agility.

The Philadelphia Eagles will look to rebound from a 22-20 loss to New England in their last game to fall to 3-2 in simulation play. Zach Ertz leads the Eagles’ offense with a 90 overall rating, including 87 acceleration and 93 catching while Alshon Jeffery and DeSean Jackson make up the Eagles’ top wide receiver duo at 85 and 84 overall respectively. Carson Wentz is under center for the Eagles at 83 overall while Philadelphia has a strong right side of their O-Line with Jason Kelce at center with a 94 overall mark, Brandon Brooks at 93 overall at right guard and right tackle Lane Johnson with an 89 overall grade. Defensively, Fletcher Cox leads Philadelphia’s pass rush at 95 overall with 95 strength, 93 tackling and 96 power move while Brandon Graham is at right defensive end at 87 overall with 90 power move and 93 impact blocking. Malcolm Jenkins leads the Eagles’ secondary at 86 overall with 91 acceleration, 90 agility and 88 zone coverage.

The simulation hasn’t been kind to either of these teams if we’re being honest, as the talent is there on both sides but the results just haven’t come along with them. With that said, aside from their first game against Dallas, the Eagles have struggled against the good teams while taking care of business against lesser teams. Atlanta has held their own and shown an ability to play better offensively, so I’ll lay the points with the Falcons here.