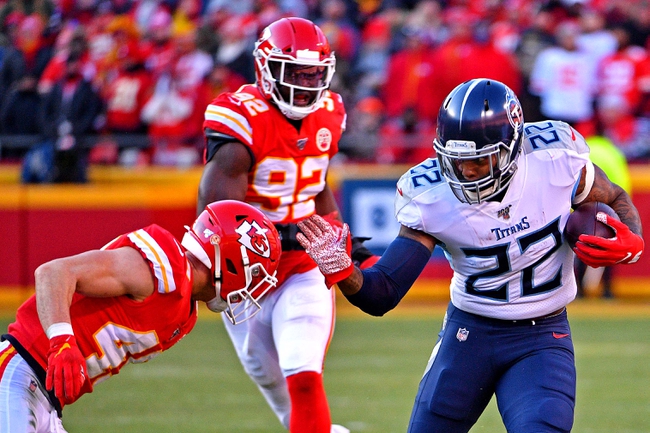 The Tennessee Titans and the Los Angeles Rams meet in a Madden 20 NFL simulation game on Monday night.

The Tennessee Titans will try to build on their 2-1 simulation record after a 30-24 win over Houston in their last outing. Derrick Henry leads the Titans at 91 overall with 91 speed, 87 strength, 91 carrying and 98 stiff arm while Delanie Walker sits at 86 overall at tight end with 86 catching. A.J. Brown and Corey Davis make up a formidable (and in my opinion underrated) receiving duo at 80 and 79 overall respectively, while Ryan Tannehill comes in at 80 overall at QB for Tennessee. Defensively, Kevin Byard shares the team-high at 91 overall with 93 zone coverage and 90 speed while Logan Ryan is at 86 overall at corner with 87 speed, 91 acceleration and 90 agility with 92 play recognition. Jurrell Casey also sits at 85 overall at right defensive end with 92 play recognition, 89 tackling and 89 impact blocking as well as 92 strength.

The Los Angeles Rams come into this one with a 1-3 simulation record following a 37-31 loss to the Arizona Cardinals in their last outing. Cooper Kupp is the Rams’ leading receiver with an 87 overall rating with 94 agility and 95 catching while Robert Woods is close behind with an 86 overall grade including 94 catching and Brandin Cooks follows at 85 overall with 95 speed, 92 acceleration and 95 agility. Todd Gurley II leads the Rams’ rushing attack at 86 overall with 91 speed and 91 acceleration as well as 95 agility and 89 carrying. Defensively, Aaron Donald is one of the highly-touted 99 overall rated players with 90 acceleration, 99 power move, 96 finesse move, 97 block shedding, 93 impact blocking and 92 tackling. Jalen Ramsey holds down the Rams’ secondary at 94 overall with 95 man coverage and 95 zone coverage with 92 speed, 93 acceleration and 90 agility.

These games are coin flips more often than not and even in the simulations, there are some things that play out in the game that replicate real life which is what the game intends to do. The Rams were disappointing this season in reality after their Super Bowl appearance the year prior and the Rams have done nothing but disappoint more often than not in these simulations, and a loss to the Cardinals just fits the bill. Tennessee doesn’t have plyers as high up on the rating scale as the Rams, but the Titans have some talent in their own right and laying a low line on the road doesn’t seem like a bad spot here. I’ll lay the points with the Titans in this spot.