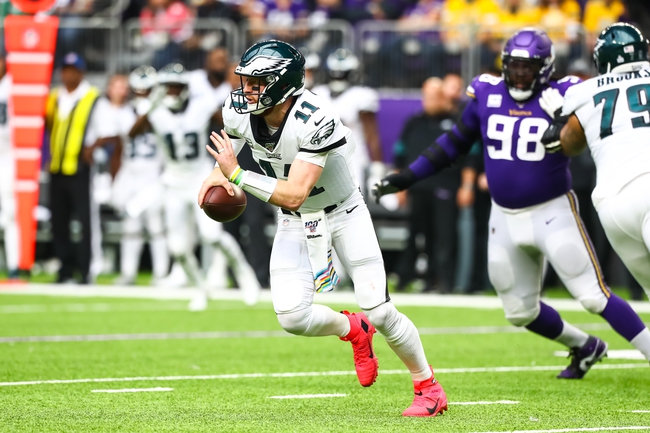 The Philadelphia Eagles and the Minnesota Vikings meet in a Madden 20 NFL simulation game on Monday afternoon.

The Philadelphia Eagles will try to rebound after falling to 3-3 in sim play with back-to-back losses after a 24-19 loss to the Falcons last time out. Zach Ertz is the top rated Eagle on offense with a 90 overall rating with 87 acceleration and 93 catching while Alshon Jeffery and DeSean Jackson make up the Eagles’ top pair of wide receivers at 85 and 84 overall respectively. Carson Wentz is at quarterback for Philadelphia at 83 overall while the Eagles’ strength sits on the  right side of their O-Line with Jason Kelce at center with a 94 overall rating, Brandon Brooks at 93 overall at right guard and right tackle Lane Johnson at 89 overall. Defensively, Fletcher Cox leads Philadelphia’s front seven at 95 overall with 95 strength, 93 tackling and 96 power move while Brandon Graham is right defensive end at 87 overall with 90 power move and 93 impact blocking. Malcolm Jenkins leads the Eagles’ secondary at 86 overall with 91 acceleration, 90 agility and 88 zone coverage.

The Minnesota Vikings will look to rebound from their first simulation loss, falling to 2-1 I sim play after a 35-24 loss to New Orleans last time out. Stefon Diggs is now a Buffalo Bill in reality, but for now, he’s still on the Vikings with a 93 overall rating with 92 catching, 91 speed, 93 acceleration and 93 agility. Adam Thielen has a 91 overall rating at wideout with 90 speed and 93s in acceleration and agility as well. Thielen also has 95 catching and 90 catching in traffic. Dalvin Cook leads the Vikings in the backfield at 90 overall with 91 speed, 92 acceleration and 94 agility while Kyle Ruoldph is rated 84 overall at tight end and Kirk Cousins is 84 overall under center. On defense, Harrison Smith leads the way at 95 overall with 93 power, 92 zone coverage, 95 play recognition and 93 pursuit. The Vikings have 3 90 overall rated defenders, with Everson Griffen and Danielle Hunter bookending the D-line while Eric Kendricks hunkers down the linebacking corps. Linval Joseph also sits at 86 overall in the middle of the defensive line.

The points with the Eagles are tempting, but the new update a few days ago made the Vikings really strong, and even if Stefon Diggs isn’t on the team, the Vikings just have the bigger impact players with the higher ratings. The Eagles have a strong line, but Minnesota has Harrison Smith, Diggs, Thielen, Cook, Griffen, Hunter and Kendricks all around 89+ while the Eagles have Ertz and Fletcher Cox. I just think I like the Vikings right now more than I do the Eagles, and I think the Vikings win this one by a touchdown so I’ll lay the points here.