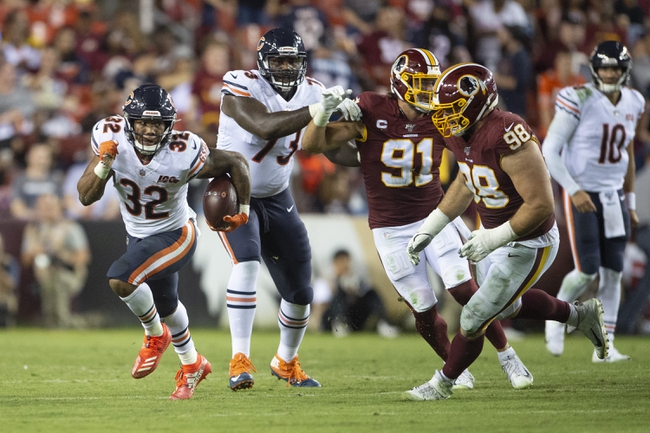 The Washington Redskins and the Chicago Bears meet in a Madden 20 NFL simulation game on Monday afternoon.

The Washington Redskins will try to rebound from back-to-back sim losses after a 26-20 OT loss to the Philadelphia Eagles last time out. Washington’s greatest asset lies on their offensive line, with Trent Williams coming in with a 92 overall rating including 95 strength, 92 pass block and 93 run block while Brandon Scherff is 88 overall with 90 run blocking and 92 strength. Jordan Reed comes in as the top receiving option for Washington at 84 overall with 87 catching and 87 catching in traffic. Terry McLaurin sits at 81 overall and Derrius Guice heads up the running back duties at 80 overall, sharing the work with Adrian Peterson who is at 79 overall. Dwayne Haskins Jr. remains the Redskins’ starting QB despite just a 70 overall rating. Defensively, Matt Ioannidis leads the Redskins’ D with an 85 overall rating with 86 acceleration and 86 strength to go along with 84 tackling and 89 power moves while Ryan Kerrigan is at 84 overall at outside linebacker with 88 power move, 88 impact blocking and 86 acceleration.

The Chicago Bears will look to build on their first simulation win after a 22-17 victory over the Detroit Lions in their last outing. Allen Robinson II leads the offensve with an 89 overall rating with 90 speed and 93 acceleration as well as 96 catching while Trey Burton comes in at 82 overall at tight end and Taylor Gabriel is on the other side at wide receiver with an 81 overall grade. Tarik Cohen leads the Bears’ backfield at 78 overall while Mitch Trubisky is still the starting QB at 73 overall. Defensively, Khalil Mack leads the charge with a stacked 98 overall rating, with 87 speed and 89 acceleration along with 94 tackling, 90 impact blocking, 91 block shedding, 91 finesse move and 95 power move. Eddie Jackson is at 89 overall at free safety with a 94 grade in zone coverage and 90 acceleration while Kyle Fuller has 92 speed and acceleration at cornerback with 91 zone coverage and Akiem Hicks is at 88 overall at left defensive end with 91 block shedding and 89 power move.

It’s hard for me to make a case for the Bears laying this many points as the Bears just haven’t looked all that good in these sim games, but their defense is still stacked and I don’t see the Redskins having much luck moving the ball. Washington hasn’t been all that good in their own right, and I just think this is a game where Washington struggles simply because their defense doesn’t hold up their end of the bargain. I’ll lay the points with Chicago here.