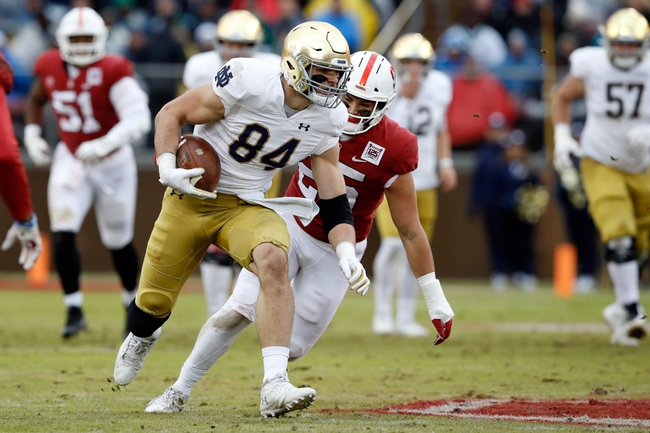 Cole Kmet is a tight end from Notre Dame who is projected to be an early-round selection in the 2020 NFL Draft. With two bowl games under his belt, Kmet has experience in high-pressure situations and will earn plenty of looks from NFL teams when it’s their turn to pick.

College Career: Kmet played high school football (and baseball) in Arlington Heights, Illinois, so he didn’t have to relocate far to attend Notre Dame. As a true freshman with the Fighting Irish, Kmet played in all 13 games, posting two receptions for 14 yards. In 11 games during his sophomore year, he had 15 receptions for 162 yards, then became the starter in his junior season in 2019.

Kmet missed the first three games of his junior campaign due to a broken collarbone, but returned to collect 43 receptions for 515 yards and six touchdowns. After initially choosing to return to Notre Dame for a senior season, Kmet reconsidered and elected to enter the 2020 NFL Draft.

Strengths: Kmet didn’t begin focusing on football completely until his sophomore season at Notre Dame (he also played baseball his freshman year), but he’s come a long way since then. He’s got good size and a long reach, and will probably add some more mass in the next few years. Kmet’s pretty solid at getting off blocks and creating space for a catch, and has a sharp focus while the ball is in the air.

If a throw isn’t quite on target, Kmet has a knack for tracking it down, and he can absorb contact well. He’s great after the catch and tough for defenders to bring down.

Weaknesses: Right now, Kmet is just an okay blocker, and though he does well with it in certain situations he needs some work on his angles and technique. He could also get into some issues with balance coming off the line if he gets pushed by a strong defender, and he hasn’t shown an aptitude for playing through contact.

Kmet also needs to work on not telegraphing his routes; he carries himself upright and a keen linebacker or corner will catch on quickly. That said, for the most part Kmet’s issues can be cleaned up; he just may need some seasoning for a year or two before he’s ready to become a full-time starter at the NFL level.

Possible Fits: The chatter on Kmet will likely intensify toward the end of the first round or the beginning of the second round. There are some high-upside guys at that level, and though we’ll probably see more of a defensive flurry in that range, impact names like Kmet will be in play as well.

The most likely place for him to end up is probably Indianapolis. The Colts are sitting at No. 44 overall, and with new QB Philip Rivers in town the team wants to get some weapons. Kmet would be a nice counterpoint to Jack Doyle and some creative play-calling could really confuse a defense with that duo. Some mocks have Kmet going to Indianapolis with the No. 75 overall pick, but if the Colts pass on him initially they’ll be taking a gamble. I really don’t think there's any possible way he’ll still be there at 75.

If all goes perfectly for Kmet on draft day he could find a home a lot sooner than the second round, though. Some mocks have him as high as No. 17 overall, going to Dallas. The Jason Witten-less Cowboys need a new face to step into those sizable shoes, and Kmet has the potential upside to fill that role—it just depends on how much Dallas believes in him.