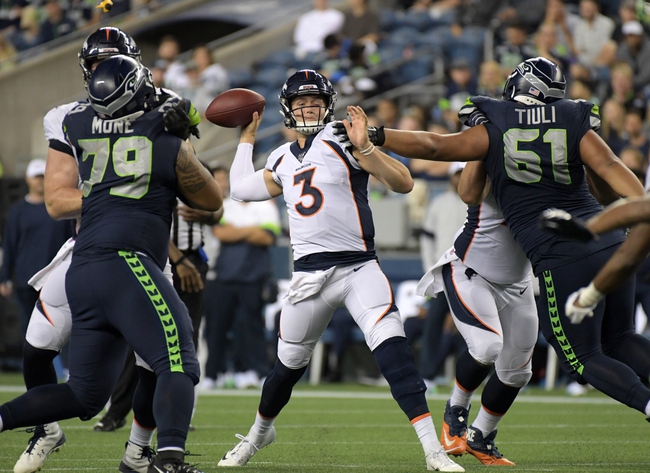 The Seattle Seahawks and the Denver Broncos meet in a Madden 20 NFL simulation game on Tuesday night.

The Seattle Seahawks will be out to rebound from their first simulation loss after a 40-34 loss to Kansas City last time out. Russell Wilson leads Seattle on offense with a strong 97 overall rating with 86 speed, 90 acceleration and 93 agility as well as 91 throwing power and a 93 for short pass accuracy, 94 for medium pass accuracy and 96 for deep pass accuracy. Tyler Lockett is Seattle’s #1 wide receiver with an 88 overall mark including 93 catching, 93 speed, 92 acceleration and 97 agility. Chris Carson also has an 86 rating in the backfield for Seattle with 88 speed, 89 acceleration and 91 stiff arm. Defensively, Bobby Wagner is Seattle’s best defensive

player at a 98 overall rating, with 96 tackling, 90 impact blocking, 98 power, as well as high-90s attribute ratings in pursuit and play recognition. Jadeveon Clowney isn’t far behind on the defensive line at 88 overall with 95 pursuit, 91 play recognition, 87 speed and 90 acceleration.

The Denver Broncos come in looking to rebound from their first simulation loss in the form of a 34-6 defeat last time out. Phillip Lindsay leads the Denver offense at 85 overall at running back with 93 carrying as well as 93 speed and 91 acceleration. Courtland Sutton is right behind as Denver’s top receiver with 89 speed, 92 acceleration and 92 catching as part of his 84 overall rating. Defensively, Von Miller leads Denver with a 96 overall rating, including 93 tackling, 89 impact blocking, 90 finesse move and 93 power move. Chris Harris Jr. makes his living at defensive back at 90 overall with a 91 man coverage rating and 90 speed. Justin Simmons and Kareem Jackson make up a strong duo in the Denver secondary at 89 and 87 overall respectively,

This game is hard for me because the Seahawks have done well for the most part and need to play better than what they did against Kansas City to keep any sort of momentum built up going. Denver was halted against Carolina and the Seahawks just have a solid defense that can make life very difficult for the Broncos. I just think this is a game where the Seahawks get back on track and stifle the broncos, so I’ll lay the points with Seattle here.