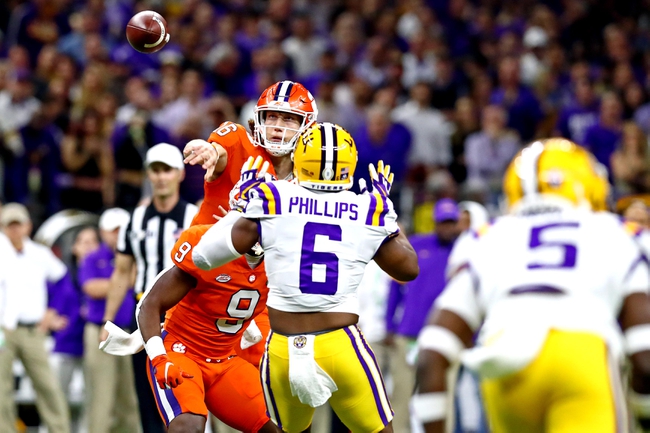 Jacob Phillips is a linebacker from LSU who will be on the board during the 2020 NFL Draft. Phillips played on the Tigers’ CFP National Championship team last season, and that pedigree will garner plenty of attention from prospective NFL teams when they’re on the clock.

College Career: Phillips played high school ball in Nashville, was selected as Tennessee Mr. Football and played in the US Army All-American Bowl as a five-star recruit. He was originally committed to the University of Oklahoma before switching to LSU.

As a true freshman, Phillips appeared in 12 games and had 18 tackles. He was a starter as a sophomore, finishing things up with 87 tackles and one sack. Phillips really broke out his junior year, leading the team in total tackles (113) with one sack, a forced fumble and a pass defense. He decided to forego his senior season and declare for the 2020 NFL Draft.

Strengths: According to most scouts, Phillips’ NFL ceiling seems to be a reliable depth linebacker and special teams player, which is good for teams looking to bolster their defensive ranks. He’s shown a nice aptitude for learning, and is great when it comes to executing a play and sticking to his assignments.

Phillips is adept at covering his gap, using leverage to work himself into the spaces. He doesn’t normally whiff on tackles, and has good technique when it comes to pursuing a ball-carrier. Phillips is a patient player and is smart enough to wait for a running back to get into a gap before he makes his decisions.

Weaknesses: Phillips doesn’t seem to have that “alpha dog” demeanor; he’s more of a team-and-scheme-oriented guy—which isn’t necessarily a bad thing depending on the roster. He can get overcome by elite competition, and powerful blockers can throw him out of position. Phillips’ lateral speed could be better, and his footwork could probably use some brushing up.

In man-to-man coverage, Phillips can get confused on routes at times, and he could be more consistent at being aggressive in pushing past blocks.

Possible Fits: Mock drafts have Phillips going all over the place, so it’s tough to predict where he’ll land. If an NFL team likes what they see on tape and feel he’ll fit in well with their squad, we could see a bit of a reach but you could make a good argument for taking him earlier.

In any case, Phillips’ ceiling is probably the third round, where teams will be looking for good values and depth players. Arizona is sitting at No. 72 overall, and haven’t had much success in the middle of the field on defense lately. Phillips would fit into that group pretty well.

Assuming Phillips slides down further, he likely wouldn’t last much past late Round 4 or early Round 5. The Chargers have an early pick in Round 5 (No. 151 overall) and probably wouldn’t pass on Phillips if he’s still there. I could see him going to a team like Atlanta in Round 4 (No. 119 overall) as well. Lots of different scenarios could play out here, so it’ll be interesting to see where Phillips lands.