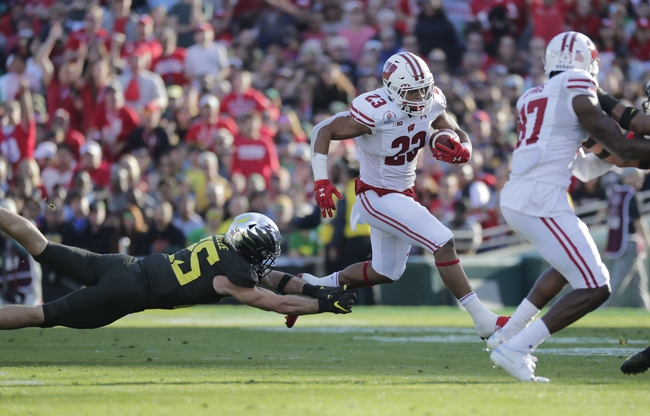 Jonathan Taylor enters the 2020 NFL draft as yet another solid running back prospect from the university of Wisconsin, making a name for himself as one of college football’s premier rushers over the last three seasons.

College Career: Taylor came out flying as a Badger starting in the 2017 season where he rushed for 1,977 yards and 13 TDs. In his sophomore year, Taylor outdid himself, averaging 7.1 yards per carry with 2,194 rushing yards and 16 TDs and last year, Taylor eclipsed the 2,000-yard mark again, logging 2,003 yards and a personal-best 21 touchdowns as Wisconsin put forth double-digit wins for the 5th time in their last 6 seasons in 2019.

Strengths: Taylor is a multi-faceted running back, and has a very good combination of speed in addition to his size, making him a potential three-down starter wherever he lands. Taylor is also a strong power runner and can truck incoming defenders and leave a path of destruction in his wake going up the field. Taylor also has a lot of power in his legs and has driven the pile for extra yardage more times than he’d care to admit. Coaches will also tell you that he has the patience of a saint, and if there’s no hole right away to break through, Taylor will wait until his line creates as a space or he can create his own space with superb ball carrier vision. Taylor also has good hands out of the backfield in the passing game

Weaknesses: Speaking of the passing game, the one knock on Taylor is that, and it’s the same thing a lot of college running backs have to deal with at the next level, he will need more in-depth coaching on pass blocking and blitz/pressure recognition and how to handle said pressure.

Outlook: Regardless of where Taylor is drafted, I expect him to have a long and bright future as a starting running back at the professional level as a three-down starter more often than not. With a rare combination of size, speed, power and athleticism, Taylor could be another one of those generational players for his position, something like Adrian Peterson was in the 2000s, or Barry Sanders/Emmit Smith in the 90s. As far as a team fit goes, as if they needed any more talent, I think Taylor lands with the Baltimore Ravens. I said it on the live show when we were doing our mock drafts, but I just think that Mark Ingram’s time is starting to dwindle, and the Ravens can properly groom Taylor to be their running back of the future alongside an equally potent Lamar Jackson. Just imagine in 5 years, seeing Lamar Jackson and Jonathan Taylor potentially in a backfield? That’s downright scary if you’re an opposing defense.