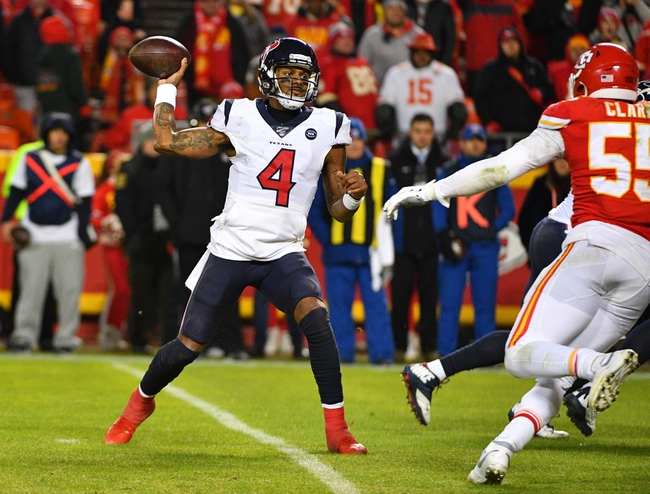 The Houston Texans and the Kansas City Chiefs meet in a Madden 20 NFL simulation game on Tuesday night.

The Houston Texans come into this one looking to build on back-to-back simulation wins after a 38-17 win over New England last time out. He’s no longer a Texan, but DeAndre Hopkins leads the Texans at 98 overall in this game with 98 catching as well as 99 grades in catching in traffic, spectacular catch, release and jumping with 92 speed, 93 acceleration and 92 agility. Deshaun Watson comes in at 86 overall at QB with 88 acceleration, 84 speed and 89 throw power while Lamar Miller is right behind at 84 overall at running back with 91 carrying, 89 juke, 92 speed, 91 agility and 91 acceleration. Defensively, J.J. Watt comes in at 97 overall with 97 strength, 94 impact blocking, 97 tackling, 93 finesse move and 94 power move. D.J. Reader and Justin Reid also come in at 84 overall for the Texans defense with Reader on the pass rush and Reid in the secondary.

The Kansas City Chiefs will look to rebound from a 54-36 loss to the San Francisco 49ers in a Super Bowl rematch last time out. Patrick Mahomes comes in as one of the highly-regarded 99 overall rated players, with 96 throwing power as well as 97 short pass accuracy, 95 medium pass accuracy and 93 deep pass accuracy. Tyreek Hill is within range at the top of the group at 96 overall, with a 91 attribute rating in catching as well as 97 juke, 99 speed, 99 acceleration and 98 agility. Travis Kelce is 96 overall also as KC’s top tight end with attributes of 99 awareness, 85 speed. 91 catching in traffic and 91 catching overall. On the defensive side of the ball,  Chris Jones and Tyrann Mathieu share the team-high on the Chiefs defense with Jones leading the pass rush at 92 overall with 91 strength, 90 tackling, 89 finesse move and 95 power move while Mathieu anchors KC’s secondary at 92 overall with a 90 man coverage rating as well as 89 in zone coverage while also being rated at 90 speed, and 92 in acceleration and 92 agility.

I considered the over here as you have two high-powered offenses, but just when I think the Chiefs are trustworthy again, they go ahead and allow 54 points to a San Francisco team that isn’t all that great if you ask me. Houston’s done more than held their own in these sim games and are balanced on both sides of the ball, enough so to pick up a cover and possibly an outright win here.