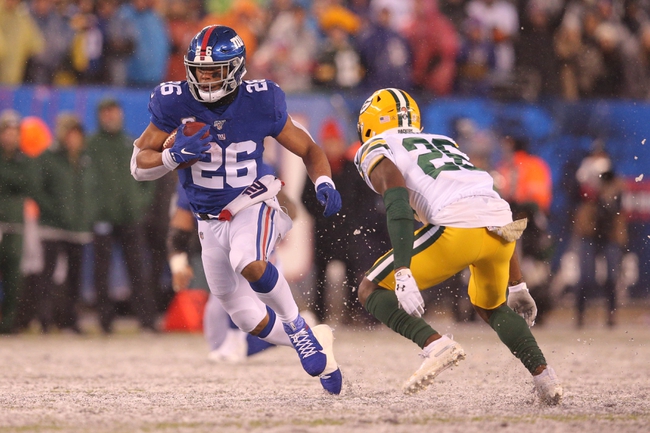 The New York Giants and the Green Bay Packers meet in a Madden 20 NFL simulation game on Wednesday afternoon.

The New York Giants will try to bounce back from their 3rd straight sim loss and a 1-5 simulation record after a 20-12 loss to the New York Jets last time out. Saquon Barkley leads the Giants on offense with an 89 overall rating, with a plethora of high marks with 92 speed, 93 acceleration, 96 agility, 94 carrying and 94 juke ratings. Evan Engram leads the New York’s receiving group at tight end at 88 overall with 88 catching, 90 speed and 91 acceleration. Golden Tate III and Sterling Shepard make up a pretty good pair at wide receiver with each logging 90 speed and 91 acceleration with Tate III having 89 catching compared to Shepard’s 88. On defense, Leonard Williams is the only 80+ overall rated player on that side of the ball for the Giants at 82 overall with 88 tackling and 88 impact blocking.

The Green Bay Packers will look to build on a 33-30 win over the Atlanta Falcons in their last outing. Davante Adams leads the on offense with a 94 overall rating, including 94 catching and catching in traffic ratings while also having 89 speed and 92 acceleration. Aaron Rodgers comes in at starting quarterback with an 89 overall rating, with 94 throwing power, 90 short pass accuracy and ratings in the high-80s in medium and deep pass accuracy. Aaron Jones leads the Green Bay backfield with an 87 overall attribute rating with 93 carrying, 92 juke, 91 speed and 93 acceleration. Defensively, Kenny Clark leads the Packer defense and pass rush at 90 overall with 95 strength with 92 block shedding and 89 power moves while Jaire Alexander is right there at 89 overall to lead the Packers’ secondary at corner, with 92 man coverage in addition to 93 ratings in speed and acceleration with 94 agility. Za’Darius Smith and Adrian Amos come in at 88 and 87 overall respectively as well as a couple more key pieces in a stacker Green Bay defense.

This is a decent sized number for a simulation especially when you consider that anything can happen. However, the Giants are as bad in the game as they looked in reality for much of the season and playing against a strong Packer defense isn’t going to help matters. Green Bay has been playing pretty well across these sim games, and I expect this game to be no different. I’ll lay the points with Green Bay as I see the Pack winning this one by double digits.