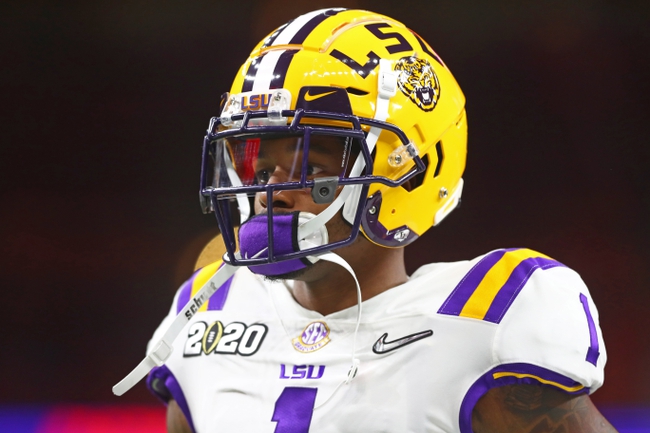 Kristian Fulton is a cornerback out of LSU who is projected as an early-round pick in the 2020 NFL Draft. As one of the stars on the Tigers’ 2019 CFP National Championship team, Fulton is sure to garner plenty of looks from NFL teams looking to improve their secondaries.

College Career: Fulton was born and grew up in New Orleans, so it makes sense that he eventually played for LSU. He appeared in three games as a freshman and made two tackles, but was suspended by the NCAA for two seasons (one of which was eventually overturned) for tampering with a drug test.

Despite sitting out of game action for 18 months, Fulton entered his junior year as a starting cornerback for LSU, playing 10 games before suffering a season-ending ankle injury. He would return to post 38 total tackles, 14 pass defenses and an interception in his senior season with the Tigers.

Strengths: Fulton has a pretty good build for an outside cornerback, and he’s allowed a 40 percent completion rate since 2018. His footwork is solid, and he’s adept at mirroring receivers during routes. Fulton is always looking for a play on the ball, and doesn’t settle into a predictable rhythm.

With a pretty good press and a tendency to avoid getting stacked downfield, Fulton utilizes his bursting drives and ability to read a receiver’s eyes and hands to great effect.

Weaknesses: Fulton’s suspension in 2017 is going to garner a lot of detractors. Falsifying a drug test is no small offense, and that fact alone will severely hamper his draft stock.

On the field, Fulton can get thrown off by press and shifty route-runners, and his confidence is shaky at times. He needs a more consistent recovery burst and some additional speed on deep routes or he’s going to get into major issues at the NFL level. Downfield, Fulton can sometimes lose positioning, and his technique on tackles is below average.

Potential Fits: You’ll find Fulton ranked all over the place in mock drafts, mostly because we don’t specifically know what each NFL team is thinking about his discipline issues in college. If you look around a bit, you may even find Fulton ranked in the first round (which seems way too high at this point), as he had a really solid performance at the NFL Combine.

The Raiders are currently No. 19 overall, and that’s probably as high as Fulton would conceivably go. Las Vegas needs a good starting cornerback on the other side of Trayvon Mullen, and Fulton could be the answer there if the Raiders like him enough. A few picks later are the Vikings at No. 22 overall, and there’s a possibility that Minnesota takes him in that spot.

If Fulton tumbles further, the Panthers (No. 38) and the Broncos (No. 46) are there in the second round, and worst-case scenario he could fall back to the Raiders at No. 81 in the third round. That said, with his upside, I feel like Fulton is probably more of an early second-round pick if someone doesn’t reach on him before that; I don’t think he’ll be there in the third.