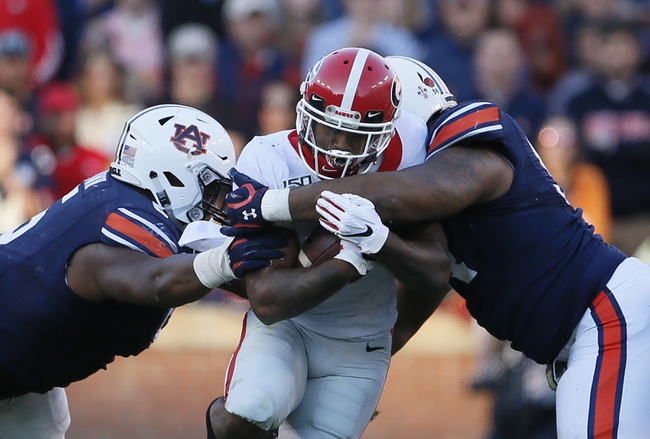 Nick Coe is a defensive end out of Auburn who is expected to be a mid-to-late round selection in the 2020 NFL Draft. Coe played three seasons with the Tigers, showcasing talents that could turn him into a solid depth lineman at the NFL level.

College Career: Coe had a great high school run, being named First Team All-State as a senior and winning a state wrestling championship at 285 pounds. As a redshirt freshman with Auburn, Coe played in all 14 games (with one start), posting 29 tackles, 4.5 tackles for loss and two sacks.

In his sophomore season, Coe started 10 of 11 games he played, logging 13.5 tackles for loss with seven sacks, two forced fumbles and 27 total tackles. He missed the last two games of that season with a wrist injury that required surgery, and lost his starting job as a junior.

Strengths: Coe has a solid frame and some good mass, and he can push off weak blocks with ease. He’s got enough strength to bully smaller tight ends who line up against him and has experience with both odd and even fronts.

Coe’s upper body strength enables him to get off blocks when he’s setting the edge; his ample hand push and hard hits go a long way toward gaining position. His power is the most impactful part of Coe’s game, and he’s usually effective when he needs to rely on his strength.

Weaknesses: Coe’s base is pretty narrow, and that can cause him to lose balance against more aggressive blockers. Shifty O-line guards can push him around, and with his below-average footwork Coe can be pressed out of position and end up on the ground.

He needs some more technique work to go with his power, and doesn’t have a ton of quickness off the snap. Coe’s pass rush lacks fluid movements and he doesn’t change direction well in the backfield. He has NFL-level strength and size, but Coe will need some major fine-tuning if he’s going to get off special teams and become a regular rotation player as a pro.

Possible Fits: Some mock drafts are high on Coe; some are very bearish. The highest you’ll likely see him predicted to go is round three or so. One possible landing spot is Atlanta, as they are looking to beef up their defense in this draft. The Falcons could potentially be looking at Coe with the No. 78 pick in the third round; if they really want him they could take him there, but it would be considered a reach in many circles.

Other mocks have Coe going much lower, since he’s something of a project. Way down at No. 158 overall are the Jets, and New York could pick him up there in order to beef up their D-line. Realistically however, it’s tough telling where Coe will go; we’re likely looking at Rounds 4 or 5, depending on how things shake out.