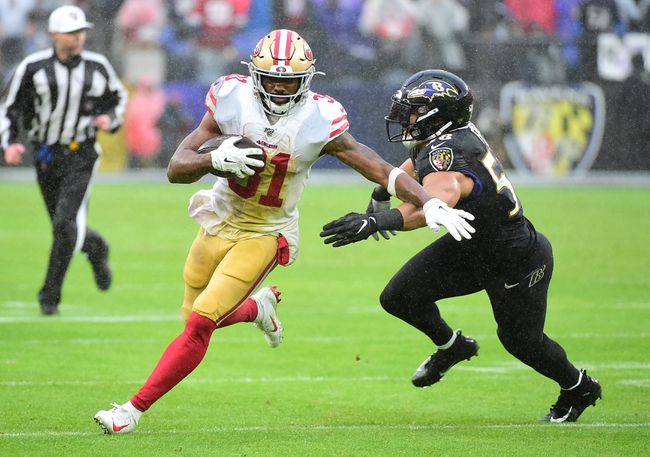 The Baltimore Ravens and the San Francisco 49ers meet in a Madden 20 NFL simulation game on Wednesday night.

The Baltimore Ravens will look to rebound from a 28-25 loss to New Orleans last time out. Lamar Jackson leads Baltimore’s offense at QB with a 92 overall rating, with 92 throw power and 92 short pass accuracy to go along with 96 speed, 96 acceleration and 95 agility. Mark Ingram II comes in at 86 overall with 88 speed, 91 acceleration and 89 carrying while Mark Andrews is close by at tight end with an 85 overall rating. Defensively, Earl Thomas III leads the Ravens with a team-high 93 overall rating, including 92 jumping and 96 zone coverage at free safety. Michael Pierce is a very good 91 overall on the defensive line with 94 block shedding and 90 impact blocking while Marlon Humphrey and Marcus Peters impose a strong cornerback duo at 89 and 85 overall for Baltimore. Humphrey owns 90 man coverage, 92 speed and 93 acceleration while Peters has 87 man coverage, 91 speed and 91 acceleration.

The San Francisco 49ers will look to build on back-to-back simulation wins after a 54-36 win over the Kansas City Chiefs in a Super Bowl rematch last time out. George Kittle remains the top receiver in the 49ers’ offense as a 97 overall rated tight end with a 98 catch rating while Emmanuel Sanders comes in as the top wide receiver for the Niners at 89 overall with 94 catching, 92 acceleration and 93 agility. Jimmy Garoppolo is the starting QB at 84 overall while Tevin Coleman is right behind at running back at 82 overall with 93 speed, 92 acceleration and 93 agility. On defense, Richard Sherman leads the way at 94 overall at cornerback, with 99 awareness as well as 98 jumping, 90 man coverage and 99 zone coverage. Nick Bosa comes in on the pass rush at 89 overall with 91 finesse move and 91 acceleration. The 49ers defense also has four more defenders with at least an 85 overall attribute rating, including DeForest Buckner, Fred Warner, Arik Armstead and Dee Ford.

I think you could make a case for either side here and it goes without saying that this is the hardest game to predict on Wednesday’s slate of games. However, I feel more confident with what Baltimore’s done defensively, and I think it’s fair to give Lamar Jackson a serious edge over Jimmy Garoppolo even in a simulation. I’ll lay the points with Baltimore in this one.