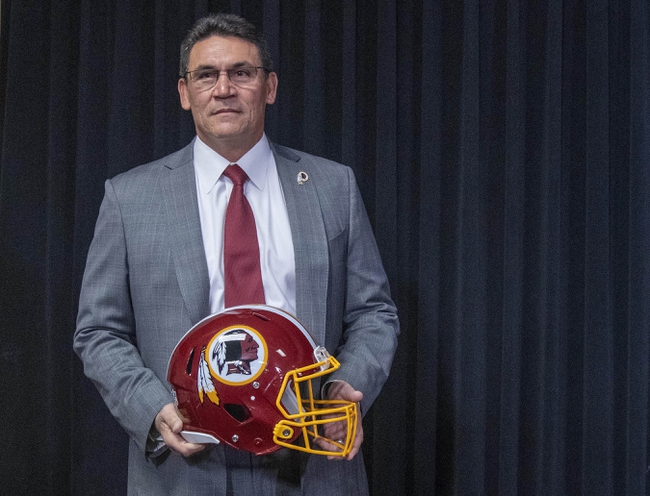 The Washington Redskins won just three games last season, but oddsmakers are liking their chances for improvement with their 2020 win total being set at 5.5 victories. The Redskins have won seven or more games in five of their last eight seasons, so there’s reason for optimism.

Subtractions: The Redskins have their quarterback in Dwayne Haskins, but it should still be noted they lost their leading passer last season in Case Keenum, who completed 64.8 percent of his passes for 1,707 yards and 11 touchdowns. The Redskins also lost a pair of cornerbacks in Josh Norman and Quinton Dunbar. Norman spent four years in Washington where he had 235 total tackles, seven interceptions, eight forced fumbles and 43 pass deflections. Dunbar spent his first five years with the Redskins and produced 150 total tackles, one sack, nine interceptions and 35 pass deflections.

Additions: The Redskins revamped their offensive line with the additions of Cornelius Lucas and Wes Schweitzer, a tandem that’s produced a combined 52 starts in the NFL. The defense brings over three-time Pro Bowl linebacker Thomas Davis, who my be 37 years old now, but he’s been one of the better tacklers and playmakers over the last decade. Safety Sean Davis comes over from Pittsburgh and has 247 total tackles, 20 pass deflections and five interceptions to his credit. Cornerback Kendall Fuller returns to Washington after winning a Super Bowl last season with the Kansas City Chiefs.

Overall: The Washington Redskins are going to be better from jump with a coaching staff of Ron Rivera, Scott Turner and Jack Del Rio now in charge. Forget the roster moves, I’ll take that over what Jay Gruden and Bill Callahan were running last season.

As for the team itself, the Redskins had arguably the worst offense in the league last season and that’s really only going to improve with Haskins taking a step in the right direction. Haskins had moments last season and we need to see those moments turn into consistency. The Redskins didn’t make any serious splashes on this side of the ball to drastically improve things, but maybe a full season of running back Derrius Guice could be a strong starting point.

Defensively, you have to like the addition of Thomas, as he’s familiar with this coaching staff from Carolina and he adds some leadership to this side of the ball. Matt Ioannidis and Montez Sweat were an underrated pass rushing duo that you’d like to see more of with both players on the young side of their careers. Landon Collins has established himself as a quality defensive back and Fuller is probably an upgrade at the cornerback spot over what Norman is these days.

The Redskins defense has the pieces to be much better than what it was last season, but in order to double their win total from a year ago, that offense needs to be better by leaps and bounds.

Schedule wise, the Redskins are in a competitive NFC East and weren’t given many favors with the Pittsburgh Steelers, San Francisco 49ers, Los Angeles Rams, Seattle Seahawks and Baltimore Ravens being thrown in there as well.

The Redskins have a new coaching staff, not a lot of playmakers on offense and a young, raw quarterback being asked to figure things out. I’m leaning toward the under on this Redskins win total.