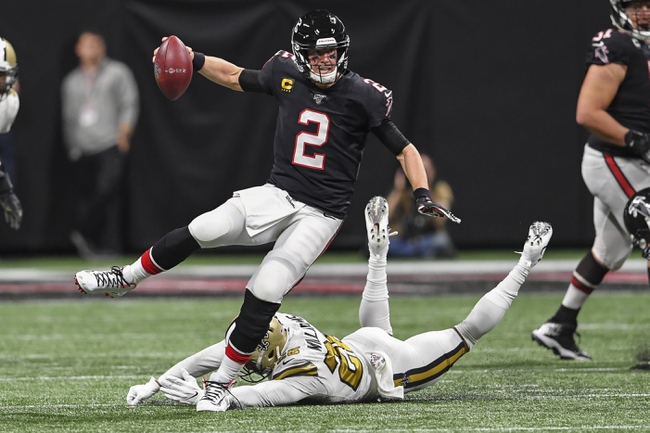 The New Orleans Saints and the Atlanta Falcons meet in an NFC South division matchup in a Madden 20 NFL simulation game on Thursday night.

The New Orleans Saints come into this game looking to build on their 3rd straight simulation win coming in the form of a 28-25 win over the Ravens in their last outing. Michael Thomas is one of the five highly-coveted 99 overall players along with 89 speed, 92 acceleration and 92 agility as well as 99 catching, 98 catching in traffic and 97 spectacular catch with 96 release and 93 jumping. Drew Brees sits at 94 overall with 99 short pass accuracy, 97 medium pass accuracy and 91 deep ball accuracy at QB for New Orleans. Alvin Kamara leads the Saints’ backfield with an 89 overall rating, including 94 acceleration, 93 agility, 90 carrying and 90 juke while Jared Cook is at 87 overall with 90 acceleration and 85 catching. On defense, Cameron Jordan leads the Saints at 92 overall with 92 impact blocking, 89 tackling and 94 finesse move. Demario Davis is at 89 overall at outside linebacker with 90 play recognition and 90 pursuit as well as 86 speed and 89 acceleration. Marcus Williams and Marshon Lattimore also make up a huge part of the New Orleans secondary at 86 and 85 overall.

The Atlanta Falcons will be looking to build off of a 24-19 win over the Philadelphia Eagles in their last outing. Julio Jones leads Atlanta with a 97 overall rating, with 92 speed and 94 agility to go along with 96 catching, 95 catching in traffic and 98 spectacular catch. Austin Hooper is an 89 overall at tight end with 97 catching while Matt Ryan comes in at 87 overall under center and Devonta Freeman leads the Falcons’ attack in the backfield with an 85 overall rating with 92 speed and 94 agility. On defense, Grady Jarrett leads Atlanta rated 90 overall with 89 strength, 90 block shedding and 93 power move while Deion Jones is the Falcons’ top linebacker at 86 overall with 89 pursuit, 90 speed and 91 acceleration. Keanu Neal and Desmond Trufant lead the secondary at 85 and 84 overall respectively with Trufant logging 92 speed, 93 acceleration and 96 agility.

The Saints are loaded in this game and have a pair of strong wins in their last couple of outings, but Atlanta has the guys to go toe-to-toe with New Orleans, starting with Julio Jones with a solid backup receiving option in Austin Hooper. After Thomas, there’s a major dropoff at receiver for New Orleans with Ted Ginn Jr. being the 2nd-best wideout on New Orleans, rated a 76 overall. Plus, the Falcons already have a win over the Saints in these sims, winning 40-34 the first time the two sides met in a sim game. I’ll take a shot here with Atlanta and the points and put a little bit on Atlanta money line as well.