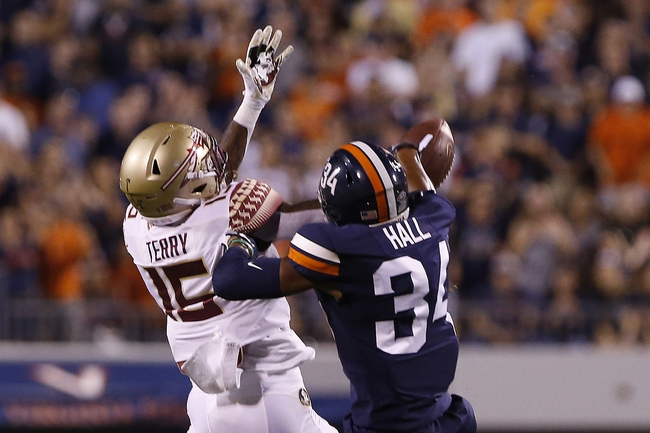 Bryce Hall is a cornerback out of Virginia who is projected to be an early-round selection in the 2020 NFL Draft. Hall has the natural talents and on-field skills to become a starter in the NFL, and plenty of teams will be interested in him when they’re on the clock at the draft.

College Career: Hall was mostly a wide receiver in high school in Harrisburg, Pennsylvania, but switched to cornerback full-time when he arrived at Virginia. He received some playing time in 2016 as a true freshman, then started every game in his sophomore year.

As a junior, Hall posted 62 total tackles (his best season in college) with two sacks, two interceptions and two forced fumbles. He managed both First Team All-ACC and Second Team All-American honors that season. Hall returned for a senior campaign, but during his sixth game of that year he suffered an ankle injury that ended his college career.

Strengths: Hall passes the eye test as an NFL-level cornerback, with solid height, size and reach. He’s sharp and instinctive, especially on short routes, and he sticks with a receiver as long as it takes to finish out a play. Hall is a patient coverage guy in a zone, and will prowl the field waiting for his opportunity to charge.

With quick footwork and short steps, Hall has a great burst. His vertical abilities are on point, and he can make great plays in the air with his angles and length.

Weaknesses: Hall’s injury will need to be thoroughly evaluated, as we haven’t seen him in game action since he broke his ankle. Aside from that, he’s not great following a press; it takes him a little longer than normal to turn his hips and go into a sprint. Hall’s not great against blazing speed, and he may need some work maintaining that top gear for long enough to track those swift NFL receivers.

Intricate routes sometimes throw Hall and create passing windows, and his finishes on tackles need some work. All of that said, assuming Hall’s injury checks out (and by all indications he should be fine) he can likely get most of these issues cleaned up with some coaching and practice-field work.

Possible Fits: Prior to his injury, Hall was considered by some to be a first-round draft pick. He’s been knocked back on many draft boards since then, and we’ll probably start hearing conversations about him when the second round begins. There will be plenty of upside defenders and skill players in that range, and Hall belongs in that group.

The Titans have the No. 61 overall pick, and they’re an intriguing destination for Hall to potentially go. Tennessee’s main strength right now is their defense, and they could use a good addition to their cornerback ranks in this draft.

Assuming Hall slides a little bit, he’ll certainly go in the third round. Some mocks have him going to Houston in the No. 90 overall slot. Houston is in need of some work in their secondary and it would be a good spot for him to land, but I don’t think Hall will last that long. Look for him to be a second-round pickup—or early third at worst.