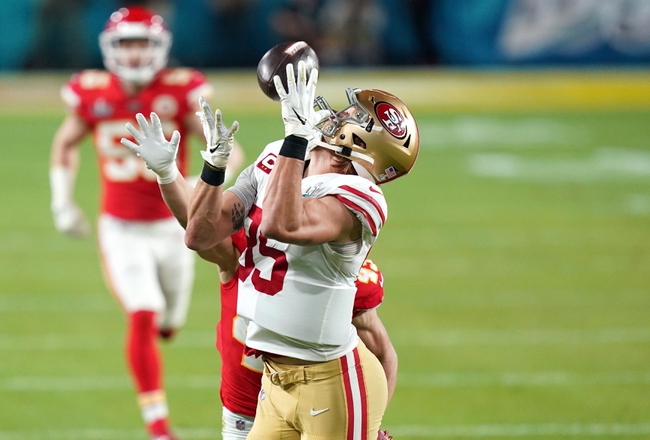 The San Francisco 49ers and the Las Vegas/Oakland Raiders meet in a Madden 20 NFL simulation game on Thursday night.

The San Francisco 49ers come into this one looking to build on their 3rd straight win in the form of a 41-10 beatdown win over Baltimore. George Kittle leads the 49ers’ offense as a 97 overall rated tight end with a 98 catch rating while Emmanuel Sanders comes in as the top wide receiver for the 49ers at 89 overall with 94 catching, 92 acceleration and 93 agility. Jimmy Garoppolo is the Niners’ starting pivot at 84 overall while Tevin Coleman is right behind at running back at 82 overall with 93 speed, 92 acceleration and 93 agility. On defense, Richard Sherman leads San Fran at 94 overall at cornerback, with 99 awareness as well as 98 jumping, 90 man coverage and 99 zone coverage. Nick Bosa leads the pass rush at 89 overall with 91 finesse move and 91 acceleration. The 49ers defense also boasts four additional defenders with at least an 85 overall rating, including Arik Armstead, DeForest Buckner, Dee Ford and Fred Warner.

The Las Vegas/Oakland Raiders will look to build on a 45-27 win over the Tampa Bay Buccaneers in their last outing for their first simulation victory. The Raiders have some solid beef on the offensive line with Rodney Hudson at 93 overall, Richie Incognito at 87 overall and Trent Brown at 86 overall. Josh Jacobs and Darren Waller each have 85 overall ratings in the Raider offense, with Jacobs owning 96 carrying and 91 acceleration at running back while Waller has 89 speed, 89 acceleration and 96 catching at tight end. Tyrell Williams is Oakland’s top wideout at 82 overall with 92 speed, 93 acceleration and 95 agility. Derek Carr remains Oakland’s starting QB with an 80 overall rating. Defensively, Lamarcus Joyner comes in with an 83 overall rating, including 88 speed and 92 acceleration, but after Joyner, every defender on the Raiders owns a 79 overall rating or lower.

The Raiders picking up a win was nice, and anything really can happen in these simulation games. However, a win over Tampa Bay doesn’t do a whole lot for me, even in a simulated game, while the 49ers just hung 54 on the Chiefs and put up 41 on a vaunted Ravens’ defense that’s one of the better defensive units in the game. The Niners also looked relentless on defense as the Ravens just couldn’t get anything going. Even in a sim game, I feel bad for the Raiders here. Give me the Niners and lay the points.