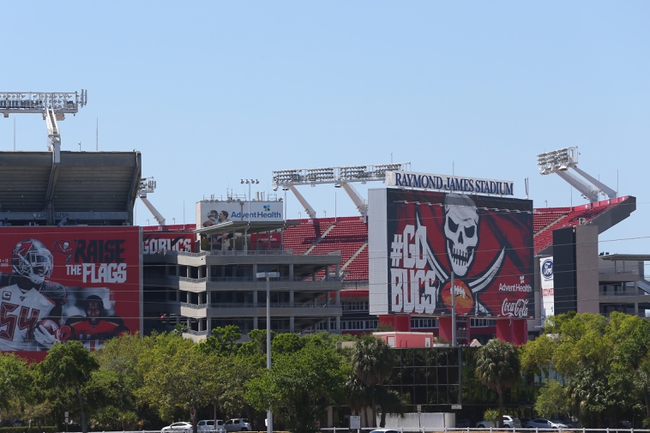 The New England Patriots and the Tampa Bay Buccaneers meet in a Madden 20 NFL simulation game on Thursday afternoon.

The New England Patriots will look to bounce back from a 31-27 loss to the Los Angeles Rams in their last game. Tom Brady leads New England’s offense at QB with a 91 overall rating with 90 throw power and 96 short passing accuracy while Julian Edelman is the top man in the Patriots’ receiving corps at 87 overall with 91 acceleration, 91 agility and 85 catching. James White leads the Patriots’ running back group at 83 overall with 89 speed, 92 acceleration and 90 agility. On the defensive side of the ball, Stephon Gilmore leads New England with a 98 overall rating with 99 awareness and 92 speed with 94 acceleration and 94 agility while also rated at 98 in man coverage and 96 in zone coverage. Devin McCourty is New England’s second-highest rated DB at 92 overall with 93 zone coverage and 90 marks across the board in speed, agility and acceleration. Dont’a Hightower leads New England’s linebackers at 88 overall with 91 impact blocking and 92 tackling as well as 93 play recognition and 93 pursuit.

The Tampa Bay Buccaneers will be looking to build on their first simulation win after a 33-27 OT win over Jacksonville last time out. Mike Evans and Chris Godwin lead Tampa Bay’s offensive attack in the Bucs’ receiving corps with Evans owning sitting at a team-high 92 overall rating with 90 catching, 95 catching in traffic and 97 spectacular catch while Godwin is at 87 overall with 97 catching. Jameis Winston at 78 overall at QB in this instalment of the Madden franchise, leading Tampa Bay under center. Defensively, Lavonte David is Tampa Bay’s anchor with a 90 overall rating, with 92 pursuit, 87 block shedding, 88 impact blocking and 89 tackling. Ndamukong Suh sits up fron at 86 overall with 93 impact blocking and Vita Vea is right behind alongside at 85 overall with 91 impact blocking.

I have no doubt that New England is the better team here, but the Patriots haven’t been overly dominant in a good chunk of these sim games, and the defense is still allowing a lot of points and allowing opposing teams to hang around more often than not. Tampa Bay hasn’t been winning games, but the Bucs have been competitive and have some top-tier talent that could allow the Buccaneers to hang in here and keep pace with New England. I’m not sure Tampa Bay wins this one outright, but I think the Buccaneers are capable of keeping this one within the number so I’ll take a shot with the points here.