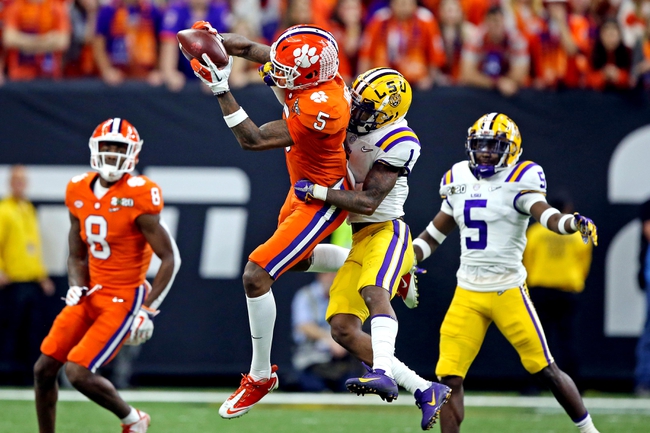 Tee Higgins comes into the 2020 NFL draft after being an instrumental part of Clemson reaching back-to-back national championship games as one of the Tigers’ top receivers and one of the top receivers in what’s a loaded wide receiver class in 2020.

College Career: Higgins saw the field quite a bit in his freshman season in 2017, but only logged 17 receptions for 345 yards. In 2018, Higgins took a big step forward with 59 grabs for 936 yards and 12 TDs while following that up with 59 catches for 1,167 yards and 13 touchdowns, helping lead Clemson to back-to-back national championship game appearances. Higgins’ 12 TDs in 2018 and 13 in 2019 led the ACC in both years.

Strengths: One of Higgins’ biggest pros that can translate to the next level is his ability to win contested jump balls in the air with his athleticism as well as a pair of soft hands that can bring in almost any ball in his vicinity. He also uses his tall 6’4” frame to high point the ball and is as good as any receiver in this class at turning the proverbial 50/50 ball into one as good as 75/25 or 80/20 in his favor. He can also play any of the wide receiver positions on the field and his length provides matchup nightmares if he gets behind his defender. If he does get space, Higgins is always a threat for yards after the catch if he’s hit in stride and challenge defenders in the open field.

Weaknesses: Higgins is a bit light even for a receiver at 6’4”, weighing just 215 pounds, and the increase in size will be key for Higgins at the next level as more physical corners may be able to knock him off of his route or disrupt his stride. Higgins also needs to show more versatility in his route running as a lot of Higgins’ routes were just fly routes or deep routes to use Higgins’ length and speed as a weapon, but you can’t go to the same well every time in the NFL or you’ll be ineffective. If Higgins can learn and execute the routes where he can win in the short and medium areas of the field, Higgins will be a top all-around receiver.

Outlook/possible fit: Higgins has all the potential in the world to be a top receiver in any receiving corps in the NFL if he can iron out the kinks that we mentioned in the weakness department. Even if he just remains a deep threat early on, Higgins has the speed and size as well as the hands to be a force in jump balls downfield and beat defenders with speed when getting past a potential press at the line of scrimmage. I could see multiple fits for Higgins come draft day, one being the Philadelphia Eagles. Alshon Jeffery can’t stay healthy or on the field and DeSean Jackson’s time with the Eagles won’t go on forever, so the Eagles will need a new #1 receiver for the future. Higgins gives Wentz a new toy to throw deep to as well as giving the Eagles a franchise player. Another team that could use him is the Miami Dolphins, especially if they’re going to be taking a new franchise QB with their first pick at #5 overall. The Dolphins also need help at a bunch of different positions, so a receiver like Higgins here wouldn’t be a bad selection at all.