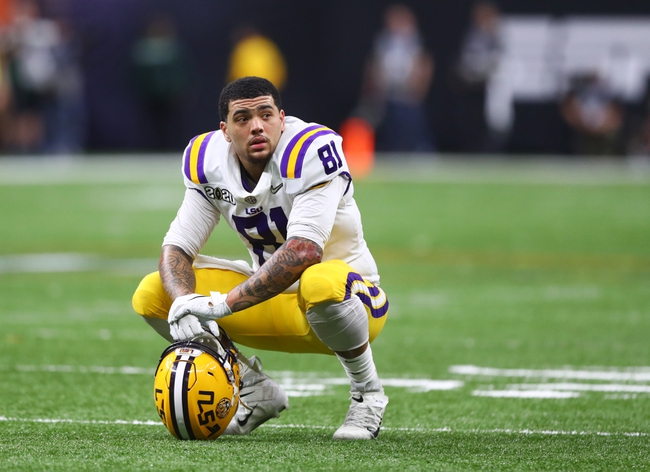 Thaddeus Moss is a tight end out of LSU who is expected to be a mid-round selection in the 2020 NFL Draft. Moss is the son of Pro Football Hall of Fame wide receiver Randy Moss, so he’s certainly got championship pedigree that will entice potential NFL teams when they’re on the clock.

College Career: Moss moved around quite a bit during his high school days, playing his senior year at Mallard Creek in North Carolina. He caught 54 passes for 831 yards and 13 scores that season and initially chose NC State over offers from Florida, Georgia, Texas A&M, Michigan and Alabama.

Moss transferred to LSU after his freshman year at NC State (49 yards and a TD from six catches during the season), and missed all of 2017 due to NCAA rules. A foot injury further set Moss back in 2018, and he was granted a medical redshirt. In his junior year, Moss put up 47 receptions for 570 yards (both school records for tight ends), and chose to forego his senior year of eligibility to declare for the 2020 NFL Draft.

Strengths: Moss’ greatest strength is probably his run-blocking abilities. He’s willing to work and has great conviction in the ground-and-pound game, and he’s a key part of the offense in that regard. Moss’ natural talent in the blocking game enables him to stymie moving targets, and he’s got the hip fluidity to adjust to an opponents’ counters.

As a pass-catcher, Moss has really great hands and a nose for the ball, and can tiptoe the sideline on tight throws outside. When he’s mismatched against a safety, Moss’ size enables him to bully those encounters.

Weaknesses: Moss has something of a wiry strength, as he’s not overly muscular and has average athleticism. He needs more explosion getting off the line and engaging with defenders, and he can get flummoxed by deft press coverage.

Moss doesn’t switch up his speed very often, and as a result his routes are too relaxed and indifferent. His footwork could use a tuneup coming into and out of breaks, and after the catch he’s not as electric as some other receivers.

Possible Fits: We’re probably looking at a third- or fourth-round pick on Moss. He’ll get some conversations from name recognition alone, but probably won’t get the early attention as some other tight ends in this draft will. We’ll see a few TEs go before him, but Moss’ name should come up late in the second round with the higher-upside skill guys.

An ideal place for Moss to go would be Baltimore. The Ravens have the No. 92 pick overall and favor two-TE sets in their offense. Moss’ blocking abilities would serve that team well, and it would probably be one of the best fits for him in the NFL.

Provided the Ravens’ aren’t interested, and provided he slides another round or so, the Packers are sitting at No. 136 overall and some mock drafts have him going there. Green Bay likely wouldn’t pass on him if he’s still on the board in that spot. That said, I don’t think he’ll last quite that long.