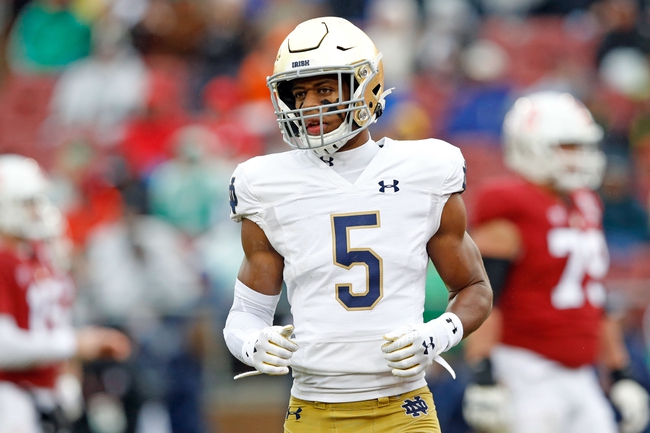 Troy Pride is a cornerback out of Notre Dame who is expected to be an early-round selection in the 2020 NFL Draft. Pride has three bowl games under his belt and performed well at the combine, so we should hear his name relatively soon on day two.

College Career: Pride had a nice high school career as a skill player in South Carolina, and was heavily recruited by programs like North Carolina, Virginia, Virginia Tech, Ole Miss, Tennessee and Clemson, but ultimately opted for Notre Dame.

As a true freshman, Pride got right to work with the Irish, playing in eight games with 12 tackles and a recovered fumble. He got his first college interception as a sophomore, then followed that up with 10 pass defenses and two picks as a junior. Pride held opposing QBs to a 50.9 percent completion rate when they threw his way during his senior season.

Strengths: Pride’s physical gifts are NFL-ready. He’s got good speed, power and reach, with a good natural hip flow and great quickness with his feet. As a college sprinter, Pride is adept at quick-burst closing when the ball is thrown, and he’s smart enough to recognize a route in progress and position himself against it in a timely manner.

Pride can move up and downfield in a hurry when he’s in a zone, closing those passing windows and shutting down a play. In the 2018 playoff against Clemson’s elite competition Pride played well, allowing just two catches for 12 yards.

Weaknesses: Pride’s confidence could use some fine-tuning; he’s sometimes timid and lacks consistency. On challenged throws he’s not very aggressive and doesn’t meet receivers at the optimal catch points. Pride gave up four touchdowns in 2019, and none of them was a terribly difficult catch for the receiver.

When he gets out of position, Pride can sometimes get panicked, and he can lose position on a route here and there. He’s not the greatest in run support either and doesn’t have an effective tackling technique.

Possible Fits: If Pride gets into the right scheme and gets coached up a bit, he should have a solid career at the NFL level. The good news is that he did well at the combine and there are plenty of pro teams looking to bolster their secondaries in this draft; he’ll certainly get his chance.

Most mocks have Pride going somewhere in the 80s overall. The second round is probably a little early but he’s got more than enough upside for the third. Dallas currently occupies the No. 82 spot, and they could use an athletic corner like Pride to replenish their ranks.

A little further down is New Orleans, who will probably be looking for a CB at No. 88 overall. Provided the Saints pass here, Minnesota is sitting at No. 105 overall, and they’re expected to add a CB with one of their first few picks. Considering there’s a big need for depth and upside CBs this year however, I don’t think Pride will still be on the board past the third round.