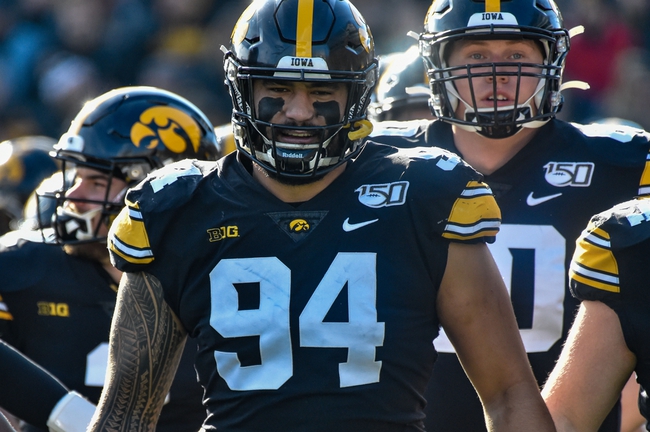 A.J. Epenesa is a defensive end out of Iowa who is projected to be a first-round pick in the 2020 NFL Draft. Epenesa has three bowl games under his belt and twice made First Team All-Big Ten, so he’s certainly got NFL-level talent.

College Career: Epenesa played both high school football and track, garnering All-American honors in both. He decided to follow in his father’s footsteps to play college ball at Iowa, and made the All-Freshmen Big Ten team in his first year.

Despite not starting any games during his sophomore season, Epenesa posted 10.5 sacks with 37 total tackles and four forced fumbles. 2019 was another solid year for him, with 49 tackles, 11.5 sacks and four more forced fumbles. Epenesa decided to forego his senior year of eligibility and declare for the 2020 NFL Draft.

Strengths: Physically, Epenesa is NFL-ready. He’s got great size with plenty of length and strength, and his college stat sheet is very impressive. When it comes to setting the edge and playing down the line, Epenesa’s quick lateral strides help control his area of the field. He has an awesome first step off the line and can cover a lot of ground in a hurry.

Epenesa showcases a veteran array of attacks on rushing plays, and is strong enough to leverage his way through blocks and into the backfield with regularity. His timing and moves arsenal show real promise.

Weaknesses: Epenesa isn’t the greatest at shifting direction, and needs to get his lower body incorporated more with push plays. His reaction time could improve; he’s a bit sluggish in the contain game.

Epenesa needs to develop some more speed moves, as he’s below average there. Shifty NFL tackles will have an easy time against him by utilizing quickness, and that could lead to a cap on Epenesa's effectiveness. Still, all things considered there’s way more upside here than there are drawbacks.

Possible Fits: By most mock drafts, Epenesa is an early-selection talent. He’ll be one of the first edge guys off the board, and right around the middle of the first round is where we’ll start hearing his name with some intensity.

Dallas is sitting at No. 17 overall, and with Robert Quinn gone the Cowboys will be looking for a powerful presence opposite DeMarcus Lawrence. Epenesa would fit in very well there.

A little further down at No. 29 overall are the Titans. Epenesa might make sense as a long-term replacement for Cameron Wake, and if he lasts that long Tennessee will certainly scoop him up. I don’t see Epenesa making it out of the first round, and whichever team gets him will be happy to have him.