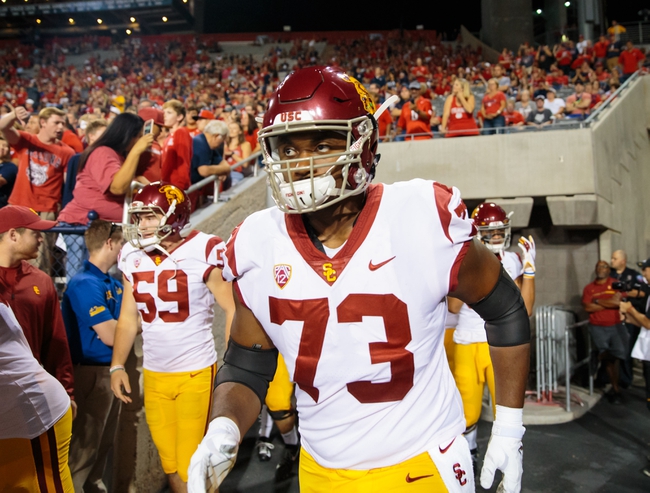 Austin Jackson is an offensive tackle out of USC who could very well be a first-round selection in the 2020 NFL Draft. Jackson made First Team All-Pac-12 in 2019 and has the natural talents for a lengthy professional career.

College Career: Coming out of high school in Phoenix, Arizona, Jackson was a five-star recruit and the best college prospect in the state. Though he also got offers from Washington and Arizona State, Jackson ultimately chose USC and was an immediate contributor, playing in all 14 games as a true freshman.

Jackson became the starting left tackle in his second year, holding that position for all 12 games. Going into his junior season, Jackson missed some practice time due to having surgery to donate bone marrow to his sister. He came back strong enough to start at left tackle again, and had a First Team All-Pac-12 season. Jackson would forego his senior year of eligibility to declare for the 2020 NFL Draft.

Strengths: Jackson gets major, major character points for his decision to donate bone marrow to his sister, and outside of that he’s also a spectacular athlete. He’s got nimble feet and fast reflexes, plus he has enough endurance to pull off the line and throw blocks downfield.

Jackson’s lateral footwork is solid; he doesn’t get flummoxed by speedy defenders trying to rocket past him. He can redirect quickly if he runs into a counter, and he’s also a great special teams asset. Jackson blocked two kicks at USC and five in high school.

Weaknesses: There’s still plenty of room for improvement with Jackson. His technique needs refined as it sometimes gets him into trouble, and he gets jumpy with his footwork. Jackson could stand to add some more strength in his upper body and needs to get his hands involved in his blocks better.

At times Jackson can lean forward too much and overextend himself, which NFL-level rushers will take full advantage of. The good news is that most of Jackson’s major issues can be cleaned up with some quality coaching and practice field work.

Possible Fits: Most mock drafts out there have Jackson going early; some have him going in the first round. He’ll be one of the first offensive linemen off the board, and the order will depend on how things shake out at the top of the draft.

One intriguing spot for Jackson to land is with Miami at No. 18 overall. The Dolphins are almost certain to select a quarterback with their first pick, and picking Jackson as protection for that QB just makes all kinds of sense.

Provided he slips a little lower into the second round, Jackson has a potential landing area in Green Bay at No. 62 overall. The Packers need an heir to Bryan Bulaga, and if Jackson is still on the board there I don’t see the team passing on him.

There are a couple of other spots I can see Jackson going, specifically No. 29 overall to Tennessee or to the Dolphins with their second-round pick. We’re probably looking at a mid-first to mid-second selection here.