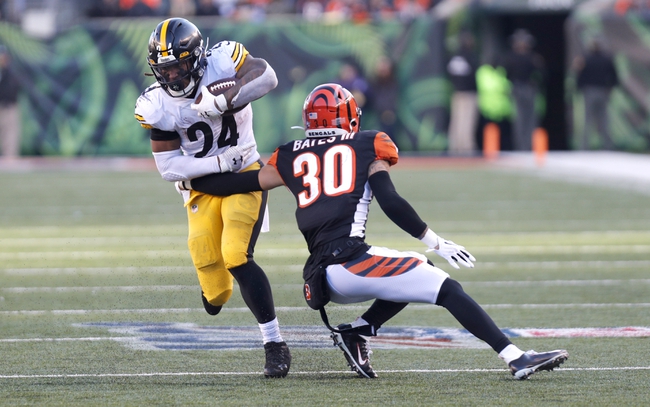 The Pittsburgh Steelers and the Cincinnati Bengals meet in an AFC North division matchup in a Madden 20 NFL simulation game on Friday afternoon.

The Pittsburgh Steelers will be looking to build on a 27-19 win over the Arizona Cardinals in their last outing. JuJu Smith-Schuster leads Pittsburgh’s receiving group with an 86 overall rating, which includes a mark of 91 speed and 92 acceleration as well as 90 catching and 93 catching in traffic while James Conner comes in at running back with an 81 overall rating with 86 speed, 89 acceleration and 89 carrying. Ben Roethlisberger is at starting QB with an 81 overall rating with 89 throwing power and 89 short passing accuracy. Defensively, Cameron Heyward leads the Steelers’ D at 90 overall with 93 strength, 91 tackling and 92 power move while Stephon Tuitt is on the other side of the front at 87 overall with 90 block shedding and 91 strength.

The Cincinnati Bengals will still be on the hunt for their first simulation win after a 19-16 loss to the Cleveland Browns last time up. A.J. Green leads Cincinnati with a 90 overall rating at wide receiver, with 90 speed and 92 agility with 92 catching and 96 marks in catching in traffic and spectacular catch. Joe Mixon comes in with an 87 overall rating with 91 speed and 93 acceleration as Cincy’s starting RB while Tyler Boyd is 83 overall at wide receiver and Andy Dalton is assigned duties at starting QB, but only has a 72 overall rating to work with. On defense, Geno Atkins leads Cincinnati on the defensive line at 88 overall with 90 strength, 89 impact blocking and 90 power move. Carlos Dunlap is also at 82 overall on the defensive line while William Jackson leads the secondary at 81 overall.

Cincinnati has been competitive in these sim games, but the fact is that the offense just can’t step it up when it’s needed, as Cincinnati is only scoring 14.5 PPG in their last two sim games. Someone once told me these sim games are like snowflakes, and no two performances are always the same, but the Steelers beat up on the Browns by 5 TDs, the same margin that the Browns beat the Bengals by. Pittsburgh’s also a lot easier to trust on offense, so I’ll take my chances laying the points with the Steelers here.