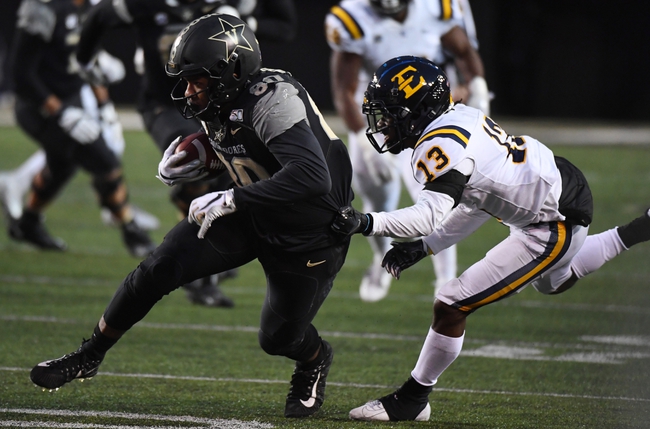 Jared Pinkney is a tight end from Vanderbilt who is expected to be a mid-to-late-round pick in the 2020 NFL Draft. Pinkney made Second Team All-SEC in 2018, and has the natural talent to have a solid career as a professional player.

College Career: Pinkney’s college run got off to an unfortunate start; he was injured in the season opener as a true freshman and had to use a medical redshirt. Pinkney still managed 22 passes for 274 yards and two touchdowns that season, and came back as a sophomore with 22 catches for 273 yards and three scores.

In his Second Team All-SEC junior season, Pinkney had 50 catches for 774 yards and seven TDs. Heading into his senior campaign, he was projected as a first-round draft pick, but finished with a down season on 20 catches, 233 yards and two touchdowns in 11 games (and another injury before the final game of the year).

Strengths: Pinkney has a good mix of size and athleticism; his arms are long and his hands are powerful. He’s good with quick throws off the line, and he utilizes his strong hands to bring in fastball throws from his QB.

Pinkney was good in the seam and over the middle in 2018 and he displayed some solid moves to rack up yardage after the catch. He’s adept at tracking a ball in fight, and doesn’t hesitate when it comes to going into traffic to make a tough catch. His run blocking technique has made great strides over the last few years as well.

Weaknesses: Pinkney is a one-trick pony when it comes to varying up his route speed; his single gear makes it easier for the coverage to key in on what he’s doing. His turns are nonchalant, and he’s inconsistent when it comes to things like play speed and physicality against coverage.

Pinkney’s route timing can be disrupted by an aggressive corner or LB who gives him contact off the line. As a blocker, he needs better footwork to be able to control the opposing player.

Possible Fits: Had Pinkney come out last year, he’d likely have earned himself a first- or second-round pick. Thanks to his off year in 2019 he’s seen his draft stock tumble a bit, and mock drafts have him all over the place.

One potential (and relatively early) spot for Pinkney to go is Green Bay at No. 94 overall. The Packers were lax at drafting receivers last season, and they really need to bolster their ranks in 2020. This is a good spot for Green Bay to go tight end, especially if they’ve addressed their WR needs on an earlier pick.

Worst-case scenario in most of the mocks out there, Pinkney tumbles to round six and gets picked up by the Bengals at No. 180 overall. I really don’t think he’ll last that long, however; a team like the Redskins or the Cowboys would likely snatch him up in round four--quite a while before he gets that low.