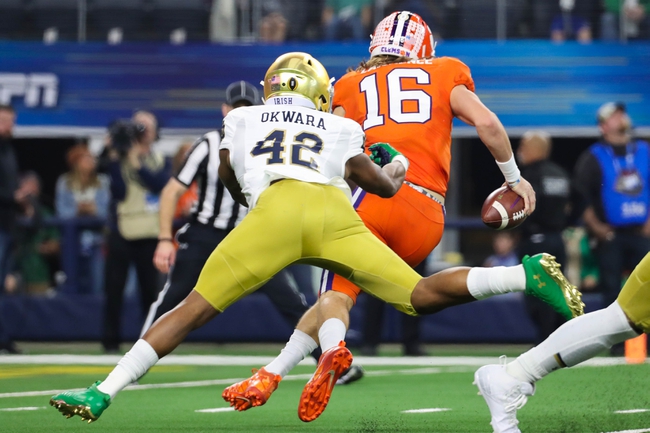 Julian Okwara is a defensive end out of Notre Dame who is expected to be an early-round selection in the 2020 NFL Draft. As the brother of current Lions DE Romeo, Okwara is an NFL-ready talent who should have a nice career as a professional.

College Career: Okwara was born in London, raised in Nigeria and went to high school in Charlotte, North Carolina. He played in 11 games as a true freshman at Notre Dame in 2016, posting four tackles. In his sophomore year Okwara got more field time, playing in 12 of 13 games with 17 tackles, 2.5 sacks and an interception.

Okwara really blossomed in his junior year with 38 tackles, eight sacks and an interception, but during his senior campaign Okwara broke the fibula in his left leg and saw his season cut short after 18 tackles, four sacks and two forced fumbles.

Strengths: The interesting thing about Okwara is that you can learn a lot by watching his brother’s on-field technique in Detroit. Julian should turn out to be similar to Romeo, and both will be strong players with a little development.

The younger Okwara has natural physical gifts that will benefit him in the NFL: long limbs, athleticism and a potential to add even more mass to his frame. He has great pursuit speed and range, with a closing burst that can give high probability for a loss on a tackle. Okwara can even drop back in coverage if necessary.

Weaknesses: Okwara needs to work on his balance and leverage, especially in the run game. He can be eliminated from a play too easily, and aggressive blockers can remove him from the line to clear run space. Okwara is a bit sluggish off the snap, and the NFL O-linemen will have a field day with him until he gets his rhythms down better.

Okwara plays too upright and needs to incorporate his legs more. As is, he can be redirected by a crafty block. He needs to develop some better usage of leverage and hand placement techniques in order to be successful at the pro level.

Possible Fits: The good news for Okwara is that plenty of teams will be looking for high-upside edge rushers in this draft, and he certainly fits in with that group. We can expect the run on skill players and impact defensive guys to kick off toward the end of the first round, and Okwara’s name will start coming up frequently once the second round is imminent.

Buffalo is sitting at No. 54 overall, and that would be a good place for Okwara to land. The Bills need more depth at the DE position now that Shaq Lawson is gone, and Okwara could fill that void nicely.

The Giants have the No. 99 pick overall, and that’s an intriguing thought. New York’s name has been tied to Jadeveon Clowney in free agency, but Okwara would serve as a younger (and much less expensive) player the Giants can mold into that same role. I don’t think he’ll fall any further than this spot in the draft.