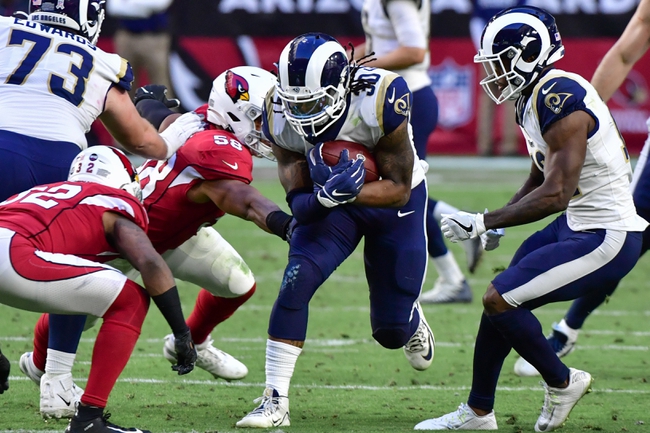 The San Francisco 49ers and the Los Angeles Rams meet in an NFC West division matchup in a  Madden 20 NFL simulation game on Friday night.

The San Francisco 49ers will try to build on four straight sim wins after a 47-35 win over the Raiders last time out. George Kittle leads the 49ers’ offensive unit as a 97 overall at tight end with 98 catching while Emmanuel Sanders comes in as the top wideout for the Niners at 89 overall with 94 catching, 92 acceleration and 93 agility. Jimmy Garoppolo is the 49ers’ starting QB at 84 overall while Tevin Coleman is right behind at running back at 82 overall with 93 speed, 92 acceleration and 93 agility. On the defensive side, Richard Sherman leads San Fran at 94 overall at cornerback, with 99 awareness as well as 98 jumping, 90 man coverage and 99 zone coverage. Nick Bosa leads the pass rush at 89 overall with 91 finesse move and 91 acceleration. The 49ers’ D also has four additional defenders with at least an 85 overall rating, including Arik Armstead, DeForest Buckner, Dee Ford and Fred Warner.

The Los Angeles Rams will look to build on a 31-27 win over the New England Patriots in their last simulation game. Cooper Kupp leads the Rams’ receiving group with an 87 overall rating with 94 agility and 95 catching while Robert Woods is close by with an 86 overall mark including 94 catching and Brandin Cooks follows at 85 overall with 95 speed, 92 acceleration and 95 agility. Todd Gurley II leads the Rams’ rushing attack at 86 overall with 91 speed and 91 acceleration as well as 95 agility and 89 carrying. Defensively, Aaron Donald is one of the game’s five highly-touted 99 overall rated players with 90 acceleration, 99 power move, 96 finesse move, 97 block shedding, 93 impact blocking and 92 tackling. Jalen Ramsey leads the Rams’ secondary at 94 overall with 95 man coverage and 95 zone coverage with 92 speed, 93 acceleration and 90 agility.

It’s a bit alarming that the Niners gave up 35 to the Raiders and anything can happen in these sim games, as I was disappointed a lot by the Rams, but L.A. beats a pretty good New England team when I’m close to counting them out. With that said, We’re getting a red hot and strong 49ers team in a pick ‘em against a Rams team that’s been inconsistent to say the least in these simulations. That may go against the logic I mentioned earlier, but there’s value with the Niners here. I’ll side with San Francisco to get the job done in this one.